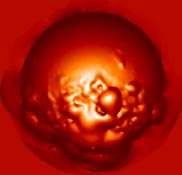 A three-dimensional portrayal of Mars, as seen from the Sun, shows how magnetized regions of the planet's crust create electromagnetic 'bubbles' that extend hundreds of kilometers into the atmosphere.

In its infancy, Mars must have had a churning, conductive
core and a magnetic field that enveloped the whole planet. But even
though the field died away four billion years ago, space physicists
now realize that vestiges of it remain frozen into the planet's crust.
Discovered in 1997 by Mars Global Surveyor, these isolated areas of remanent magnetism
are strongest in the planet's ancient, heavily cratered southern hemisphere,
particularly in the regions known as Terra Cimmeria and Terra Sirenum.

In fact, David A. Brain (University of Colorado) has
found that Mars fairly bristles with scores of localized "mini-magnetospheres."
He and Fran Bagenal, his research advisor, analyzed MGS's magnetometer
data and computed how high Mars's magnetic influence extends into
the atmosphere above various points on the surface. The result suggests
that the protective bubbles are surprisingly large — the one
over Terra Cimmeria and Terra Sirenum tops out at a height of 1,400
kilometers — and envelop roughly a third of the planet's surface.
Magnetically speaking, "Mars is lumpy and bumpy," Brain reported last
week at a meeting of planetary scientists. Moreover, he notes, the
shapes and sizes of the magnetized regions change as the planet rotates,
expanding and contracting as they encounter the high-speed solar wind
at different angles.

Although they are only a few percent as strong as Earth's
magnetic field, the localized bubbles act like impenetrable obstacles
to the solar wind's ionized plasma. (The planet's tenuous ionosphere
is too weak to repel the solar wind alone, especially when the Sun
is active.) Thus these electromagnetic shields may someday serve as
"safe havens" for Marswalking astronauts looking for protection from
solar storms.

How Does the Event Horizon Telescope Work?