Out-of-this-world greenhouses might be feasible. That's the word from the Phoenix lander scientists, who announced via a teleconference on Thursday that the craft has found the surface of Mars to be surprisingly Earthlike, containing a macédoine of inorganic minerals that life would need to survive.

"We have basically found what appears to be the requirements, the nutrients to support life, whether past, present, or future," said Sam Kounaves (Tufts University), whose miniaturized wet-chemistry lab has radioed back the results of its first analysis. "The sort of soil there is the type of soil you'd probably have in your backyard."

Close-up view of dirt clumps resting on lip of the Phoenix lander's sampling scoop, as recorded by the Robotic Arm Camera.

The experiment, part of the Microscopy, Electrochemistry and Conductivity Analyzer (MECA), mixed dirt with water brought from Earth and took readings from sensors sensitive to the presence of inorganic salts containing chlorine, magnesium, sodium, and potassium. Still to come is a test for sulfur-bearing salts.

A key finding is that the sample's pH level — how acidic or alkaline it is — lies between 8 and 9, meaning it's slightly alkaline (neutral is 7) but a far cry from the extremes some researchers had predicted. While acid-loving plants like strawberries might have a hard time growing in Martian soil, Kounaves quipped, it'd be perfect for "asparagus, green beans, and turnips."

"There's nothing about it that would preclude life," said Kounaves. "In fact, it seems very friendly." He likened it to soils found in the dry valleys of Antarctica.

A second experiment, the Thermal and Evolved Gas Analyzer (TEGA), heated a sample to 1,000°C (1,800°F) to study the gases released. Lead investigator William Boynton (University of Arizona) reports that the extraterrestrial bake-off revealed carbon dioxide and water vapor that must have been chemically bound to minerals, confirming that dirt at the landing site had interacted with water in the past.

"We don't know whether that interaction occurred in this particular area in the northern polar region, or whether it might have happened elsewhere and blown up to this area as dust," said Boynton. 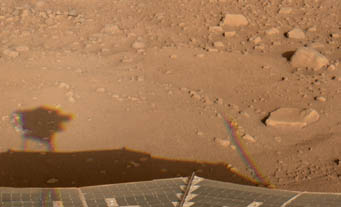 Happy solstice! Phoenix's Surface Stereo Imager recorded this scene on June 25th, the 30th "sol" (Martian day) since its arrival and the beginning of Martian northern summer. The camera used filters to closely match the color your eyes would see on Mars. The shadow of the camera atop its mast is at left center.

Phoenix has yet to find any trace of organic molecules, those containing carbon and nitrogen, though the lander's tests are still unfinished. Analyses of water ice unearthed by the lander should provide the most direct test for organic compounds, and Boynton says his detector should be able to detect abundances down to one part per million or less.

Michael Hecht (Jet Propulsion Laboratory), lead scientist for MECA, says that with these new results the lander's teams could actually start a list of the fertilizers necessary to have a successful greenhouse on the Red Planet.

Who knows? Maybe someday the veggies at the supermarket will bear stickers that say "Product of Mars."

Weell...
Thanks for all this, & I might like to live on Mars, I really might!
The only comment I really want to make,is this:We knew that the North Polar region had water ice over 50 years ago.
Why all this fuss now youve found some?
Exactly what is it that all the money was spent to discover?
NASA was just playing for more funding with this one!
Welcome back Science!

Ring Around a Saturn Moon?