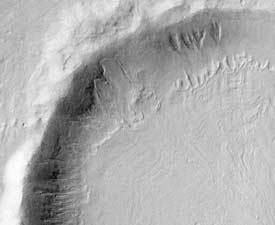 The 2001 Mars Odyssey spacecraft captured this image showing Martian gullies and a 'pasted-on' feature that has been interpreted to be snow on the shadowed sides of the crater.

Mars Odyssey, the latest orbiter to map the red planet, is continuing to earn its stripes. In a recent paper in Nature, Philip R. Christensen (Arizona State University), the principal investigator on the craft's Thermal Emission Imaging System (THEMIS), has uncovered what might be the answer to one of the most enigmatic Martian questions of the past few years: Why do shadowed sides of some crater walls bear deep ruts?

Since June 2000, Mars experts worldwide have been fussing over this "gully problem." Theories to explain their formation have ranged from hidden liquid-water reservoirs that leak out from behind ice dams, to carbon dioxide deposits creating dry-ice landslides. Now Christensen has presented what may be the most simple explanation of all — they are formed by melted snow.

The process, he explained at a news briefing on February 19th, is driven by Mars's fluctuating tilt toward the Sun. This obliquity ranges from 0° to 35° over millions of years. This means that at some epochs the poles receive much more sunlight than at others. Astronomers have known for some time that both polar caps contain vast caches of water ice. Christensen believes that during periods of high obliquity, the polar ice sublimes and the resulting water vapor then "snows" across the cooler mid-latitude regions. Over time as the planet's obliquity oscillates, the equator again gets more sunlight. The light penetrates through the snow, which acts as an insulator. So while the top most layer of snow remains intact, the snow in contact with the Martian surface heats up and melts. The meltwater carves the Martian landscape, creating the gullies. 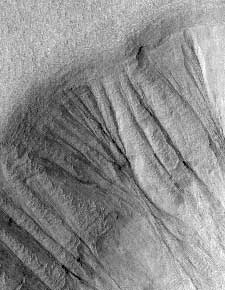 This closeup view of a Martian gully shows the deep groves cut into the crater wall by melting snow. Some lingering snow is seen at the top right corner of the image.

This idea solves several nagging problems. Gullies should only appear on shadowed slopes because snow cover in regions exposed to direct sunlight would have disappeared too quickly to have eroded the ground beneath. Gullies aren't found on shallow slopes because those receive too much sunlight. And because the source of the water is from above, not below, there is no reason to evoke a shallow-buried liquid-water layer. (Scientists had much difficulty explaining why a pool of water so close to the surface wouldn't freeze solid.) Until now, says Martian hydrology expert Bruce M. Jakosky (University of Colorado, Boulder), "none of [the Martian gully theories] have been very good. This is the most consistent explanation with the observations so far."

Christensen's scenario came from analyzing images from THEMIS showing strange "pasted-on regions" near the gullies. The lingering layers are the last patches of snow, now covered with dust and protected from sublimation. "Mars seems to have had quite a bit of snow," says Christensen. The process should be periodic too. As Mars's obliquity shifts back toward sunlit poles, water will again sublime and renew the deposits. "The snow will be back," he says. "It's a dynamic process."

Although Christensen doesn't believe gully formation is happening currently, given the proper Goldilocks situation — one where the temperature, pressure, amount of sunlight received, and thickness of the snow layer are all "just right," trickles of liquid water could be present. "I can't think of a more exciting place to look for life," says Christensen. 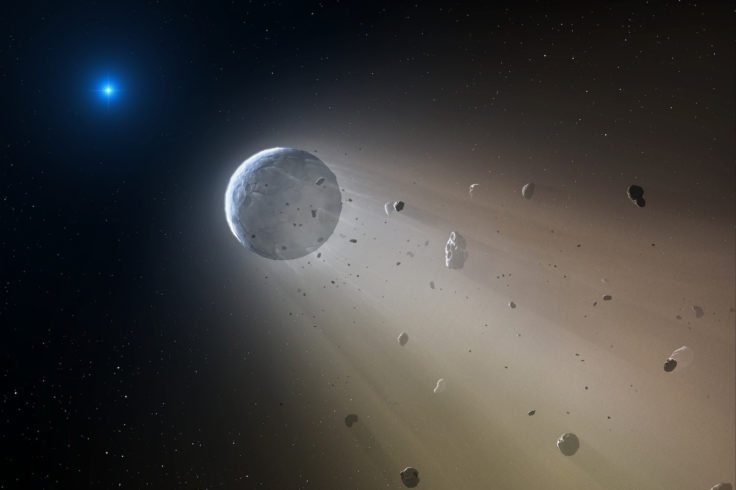 Do Sunspots Cycles Forecast the Rain?