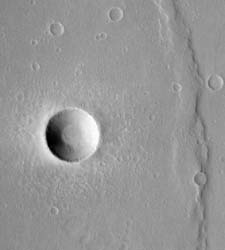 A fresh impact crater, about 3 kilometers wide, has been gouged from a lava-covered plain in the Lunae Planum region of Mars. The crater is flanked at right by a 'wrinkle ridge' much like those seen on the Moon's dark maria. The Thermal Emission Imaging System (THEMIS) on the 2001 Mars Odyssey spacecraft recorded this scene at visible wavelengths in April 2002.

For two decades, planetary geologists have been painting their dynamicist colleagues into an ever-tighter corner. Several dozen meteorites with Marslike compositions argue that asteroidal impacts occasionally blast rocks off the Red Planet, and that some of these rocks eventually find their way to Earth. Yet dynamicists initially scoffed at the notion that chunks of Mars could ever be accelerated to escape velocity (5 kilometers per second) without being shocked to smithereens.

After much number crunching, however, impact modelers eventually deduced that it could be done — if the impact event were powerful enough to leave behind a crater at least 10 km across. The timing seemed plausible; the youngest Martian meteorites are volcanic basalts only 180 million years old, and collisions big enough to make 10-km craters occur on Mars about once every 200 million years on average. But such an impact should have left a sizable, fresh-looking scar on one of the planet's lava-covered plains, and nothing so obvious has turned up. Moreover, the evidence in hand suggests that at least six separate ejections have taken place.

Fortunately, computer impact simulations now suggest that such big bangs aren't needed after all. In the November 7th edition of Science Express, three researchers conclude that collisions yielding craters only 3 km across are energetic enough to eject millions of small Martian rocks into interplanetary space. Collisions of this size should happen on Mars every 200,000 years or so, and consequently chunks of the Red Planet should be plunking down on Earth several times each year.

James N. Head (Raytheon Missile Systems), who performed the computer modeling for his doctoral thesis at the University of Arizona, also managed to solve another Martian-meteorite quandary. Most of these stones crystallized within the last few hundred million years, yet roughly half of the Red Planet's surface is a good 4 billion years old. So why haven't more "old Martians" been found? The key, as Head and his colleagues explain, is that the meteorites must have originally been buried in the layer of regolith, or crushed rock, that covers the planet's exterior. Younger regions, like the lava plains, have relatively thin crush zones, but the most ancient terrains are covered to depths of hundreds of meters. Because the presence of a thick regolith reduces ejection speeds, only very energetic impacts can excavate material from these regions — and since big impacts are infrequent on Mars, ancient samples of Mars should reach Earth only rarely.