The Curiosity rover caught an unearthly sight in Martian skies.

This sequence of 41 images shows the larger of Mars's two moons, Phobos, passing in front of Deimos, as observed from the planet's surface by Curiosity. The video is sped up by roughly a factor of five.

I’m pretty fond of our planet, but in one respect Mars has Earth beat: it has two moons dancing in its sky.

Even though Phobos is less than 1% the size of our Moon, from Mars’s surface it looks about half as big as the Moon appears from Earth. That’s because Phobos orbits about 6,000 km (3,700 miles) above the planet’s surface, while the Moon is more like 380,000 km above Earth’s. Deimos is about half Phobos’s physical size but farther out, roughly 20,000 km. 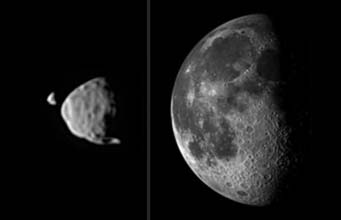 This illustration shows how large the satellites Deimos (left) and Phobos (center) appear from Mars's surface, compared with how big the Moon looks from Earth's. The Moon's diameter is actually more than 100 times greater than that of Phobos. But Phobos is so much closer to Mars than the Moon is to Earth, the Martian satellite appears at a respectable size in the Red Planet's sky.

Hence, a comparison view of the three moons’ apparent sizes from their respective planets’ surfaces would look like the view at right.

Because Phobos orbits so close to Mars’s surface, an observer standing in the Red Planet’s polar regions couldn’t even see it. (That’d be some discovery for a Martian Magellan.) But in 100 million years the view will be even more different: the moon’s orbit is slowly shrinking, meaning one day the satellite might break up into a ring of fragments girding the planet or even crash into it.

Maybe we can one day see what an eclipse would look like on Mars!

In the image in this article credited to "NASA/JPL-Caltech/ Malin Space Science Systems/Texas A&M University" (seriously??), we see a comparison of the apparent sizes of Phobos and Deimos seen from Mars and the Moon seen from Earth. The sizes seem right. No problem there. But look at the Moon (our Moon). When have you ever seen it look like that?? The maria are in all the wrong places. How could we see Mare Imbrium and Mare Crisium at the same time when the Moon is apparently half full? That can't happen! And what is Mare Serenitatis doing way over on the Moon's limb?? Has the Moon been rotated?? In fact, this is a view of the Moon you'll NEVER see from Earth. That's a view from high above the Moon's north pole. Apparently the graphic artist who created this comparison grabbed a standard image of the Moon showing it as it would never appear from Earth. In fact, sometime after the original publication, someone out there apparently noticed this and FIXED the image on the main JPL site here: http://www.jpl.nasa.gov/news/news.php?release=2013-253. Isn't that better? There's the Moon we know and love... 🙂

Frank... you're absolutely correct. the initial version of that comparison used an image of the Moon taken by the Jupier-bound Galileo spacecraft in 1992 (http://is.gd/rPlC9i). my guess is that the NASA folks went looking for a Moon image in the public domain and grabbed that one. but something else was wrong: the scaling. in the new version (which I've substituted), the Moon is a lot larger relative to Phobos/Deimos than it was before.

Thanks, Kelly. Yes, it is bigger, isn't it? I didn't notice that. I just did the numbers quickly: the apparent polar diameter of Phobos can range from about 7.2 minutes of arc when it is low in the Martian sky to about 10.6 minutes of arc when it is near the zenith. That's a bigger relative range than our Moon from perigee to apogee. Counting pixels, the current image appears to be the best case: it's the Moon near apogee from Earth compared to Phobos near the zenith on Mars. The max equatorial (Phobos equatorial) diameter of Phobos is around 13.2 minutes of arc. Of course if we can get the world to think there's a SuperPhobos tonight, it will appear enormous... in the eye of the observer.