As the meteorite specialist for the Beijing Planetarium, Baolin Zhang gets all kinds of unusual reports — like the dramatic (but ultimately specious) tale of a peasant woman who recently found a blue-ice "meteorite" in her yard. 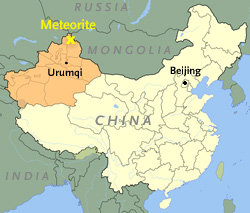 Although the exact location of the newly found meteorite has not been announced, its general location is the mountainous border region of China's Xinjiang Uyghur province.

But credible reports of a massive, oddly shaped and colored stone in the remote Altai Mountains of Xinjiang Uygur province (in northwest China) got his attention. So earlier this month he assembled a small team to check it out firsthand. The trek was cold and arduous, involving a rented jeep, borrowed horses, and even a camel to cross rugged terrain and rivers still swollen with snowmelt.

On the afternoon of July 16th, after reaching a mountainous crest 9,500 feet (2,900 m) up Zhang and his team finally spotted their objective: a large dark-brown stone jutting from the ground. It took only moments for him to realize what they'd found. "This is a huge iron meteorite," he exulted as cameras recorded the scene. 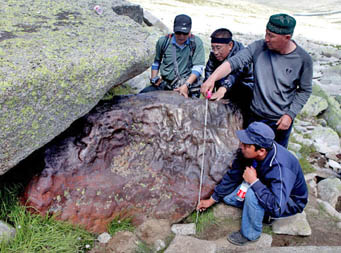 Chinese researchers measure a huge iron meteorite found in a remote mountainous region in July 2011. The oblong metallic object has an estimated mass of 25 tons or more.

Based on the size of the oblong portion above ground, 7.5 feet (2.3 m) long and about half as wide, Zhang thinks its mass is roughly 25 tons — and it could perhaps top 30 tons. Such an enormous find would rank as one of the largest meteorites known, perhaps even surpassing China's current record-holder, the 28-ton Armanty iron, found in the same region in 1898.

Apparently the big stone's existence has been well known among locals for decades. A few scrawls of graffiti have been cut into the exterior, which also bears "saw marks" that expose the interior. As Zhang reports, "The surface was shiny silver, and I can clearly see exposed not only the iron-nickel composition but also the unique grid lines," called a Widmanstätten pattern, that are common among iron meteorites.

Interestingly, the meteorite is wedged beneath an even larger granite slab, and apparently both were dragged to their current locations long ago by glaciers. It's not yet clear when or how the massive Xinjiang stone will be excavated — though this would seem too magnificent a prize to simply leave in place. The Armanty iron is on display outside the Xinjiang Geology and Mineral Museum in Urumqi, the region's capital city. 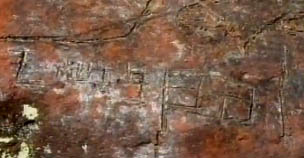 A dozen names, some dating to 1980, are carved into the Xinjiang meteorite.

Conceivably, the Xinjiang and Armanty meteorites are part of the same fall; tests should soon establish whether they are siblings or just happen to be enormous unrelated hunks of meteoritic metal that fell to Earth from interplanetary space.

Wow! A hunk of burning love!

Kelly's article says, "this would seem too magnificent a prize to simply leave in place." -- From the photo it looks like this meteorite is already in a pretty magnificent setting. Why not just leave it where it is, amid the rocks by river in this glacial valley, where people can come and marvel at it while reflecting on the geological history of the Earth as well? Why dig it up and take it out of context? On a pedestal in a museum it's just going to be another big rock that holds people's attention for about ten seconds.

Yes, it's in a marvelous setting. But it isn't like an endangered species of plant or animal--it can be moved without harming it or destroying its aesthetic and scientific value. I think and hope that the Chinese will move it to a place where the public may see it without renting jeeps or borrowing horses and camels. As for holding people's attention for 10 seconds, it will almost certainly be incorporated into little propaganda talks to encourage Chinese kids to go into science. Someone, after seeing it, will focus their attention on it and its mates around the world for a lifetime.

What a wonderful meteorite!

I recently wrote a series of three articles on the largest meteorite in the world - the Hoba meteorite in Namibia, which weighs 61 tons,(Monthly Notes of the Astronomical Society of Southern Africa, Vol. 67, 2008, Nos. 5/6, 9/10 and 11/12). included is a colour photograph of how the meteorite has been preserved and displayed. If any reader would like a set of these articles just drop me a line at [email protected] and I will be happy to oblige. Prof. Petere Spargo, Department of Physics, University of Cape Town, South Africa.

Please note that the fall site of the Armanty meteorite generally given is incorrect. The actual fall site was approx. 47N 91E in Mongolia. It was moved from there to Urumqi by the Chinese in 1965. They then gave the stone a 'new' fall site, 47N 88E in China. This may be verified by simply examining Google maps and comparing the sites with insitu photos published by the USSR Academy of Sciences in 1962.