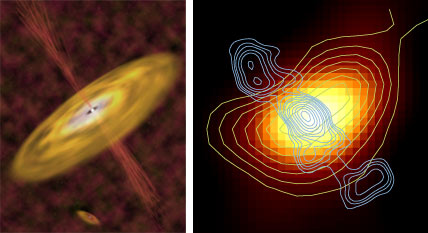 Left: This artist's impression shows an accretion disk — a swirling mass of dust-laden gas that feeds material onto a growing protostar at its center — and jets spraying away from the vicinity of the protostar in opposing directions. Right: New submillimeter-wave observations of a massive protostar in Cepheus show evidence for a disk (yellow glow and green contours) at right angles to previously discovered jets (blue radio contours). This bolsters the notion that even stellar heavyweights can grow through accretion.

After decades of patient sleuthing, astronomers have pretty well figured out how stars like the Sun form: within swirling pancakes of gas and dust. The gas in these so-called accretion disks bulks up the growing star, astronomers agree, while jets streaming away in opposing directions carry off angular momentum — negating the "centrifugal force" that otherwise would prevent the swirling gases from spiraling onto the growing star-to-be. The tale is backed up by evidence ranging from Hubble Space Telescope pictures of disk-girdled glows to the fact that our solar system's planets follow coplanar orbits.

But the birth processes of heavy stars — those with at least 8 times our Sun's mass — remain mysterious. After all, those stars are far rarer than lightweight ones, making them hard to study, and they evolve much more rapidly, so it's hard to catch one on the act. What's more, theorists have worried that intense light from a massive protostar might push all accreting matter away, nipping its own growth in the bud. Because of this, some have postulated that big stars form not by accretion but when small stars merge. 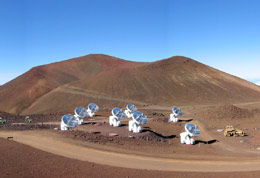 From its high, dry perch atop Hawaii's Mauna Kea, the Submillimeter Array's eight antennas (each spanning 6 meters) gather photons that emanate from dust grains and chemical compounds in stellar nurseries and interstellar clouds. Submillimeter wavelengths fall between infrared and radio.

Courtesy Jonathan Weintroub and the Harvard-Smithsonian Center for Astrophysics.

However, astronomers using the Submillimeter Array, a recently completed octet of dishes atop Mauna Kea, have garnered strong evidence that accretion can make big stars as well as small ones. The best example yet, some say, appears in today's issue of the weekly science journal Nature. There, Nimesh A. Patel, Salvador Curiel, T. K. Sridharan (Harvard-Smithsonian Center for Astrophysics), and seven colleagues show that Cepheus A HW2, a protostar that packs some 15 solar masses, is surrounded by an elongated, rotating, dust-laden gas cloud — itself likely outweighing our Sun several times over. 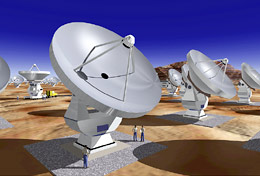 When completed perhaps a decade from now, the internationally funded and operated Atacama Large Millimeter Array, or ALMA, will enable astronomers to image protostellar accretion disks in great detail.

Not that Cepheus A HW2 is the only example of a massive, B-type star being birthed within a disk of some sort, says Debra Shepherd (National Radio Astronomy Observatory). In fact, Shepherd codiscovered the first known solar-system-size disk around a massive star five years ago, and nearly a dozen such systems now are known, including the famous Becklin-Neugebauer object, a once-mysterious infrared source hidden in the depths of the Orion Nebula, whose newfound disk also appears in this week's Nature. But Cepheus A HW2 "is one of the best single examples," says Shepherd, "and it supports a growing consensus that even the most massive stars form by accretion."