I don't recall exactly where and when I first saw the orders-of-magnitude movie Cosmic Zoom, the lesser-known precursor to Charles and Ray Eames's film Powers of Ten. But ever since then, I have been fascinated by them both and all manner of representations of scale. 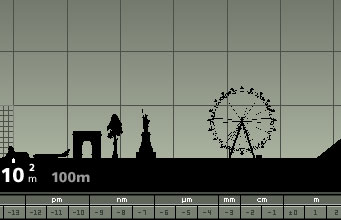 Just a segment of the "scale line" for Nikon's Universcale.

Weeks ago, fellow editor Kelly Beatty forwarded me a link to a web-based variation of the theme at, of all places, the website for camera-maker Nikon. The Universcale is an interactive, multimedia version of the powers of 10. It gradually takes you from the entire universe to within an atomic nucleus, from 100 billion light-years to 1 femtometer (1 trillionth of a millimeter). You can pause along the way to read about the objects representing sizes, and and you can skip around and watch the universe zoom by.

If you want to confine yourself to our solar system, Alan Taylor has a handy poster that's a to-scale comparison of all known bodies larger than 200 miles wide. Check out the rest of Taylor's site for more thought-provoking fun, including a list of the longest drives that Google Maps can generate. I've wondered something similar: where and what's the longest drive that brings you back to your origin if you only make right-hand turns (or only left-hand turns)?

Finally, here's something if you're like me and are fascinated by massive construction projects, especially those implied by sci-fi movies (oh, the poor workers who built the Death Star only to have it blown up — twice!). You'll enjoy browsing Jeff Russell's Starship Dimensions. How's that for some perspective?