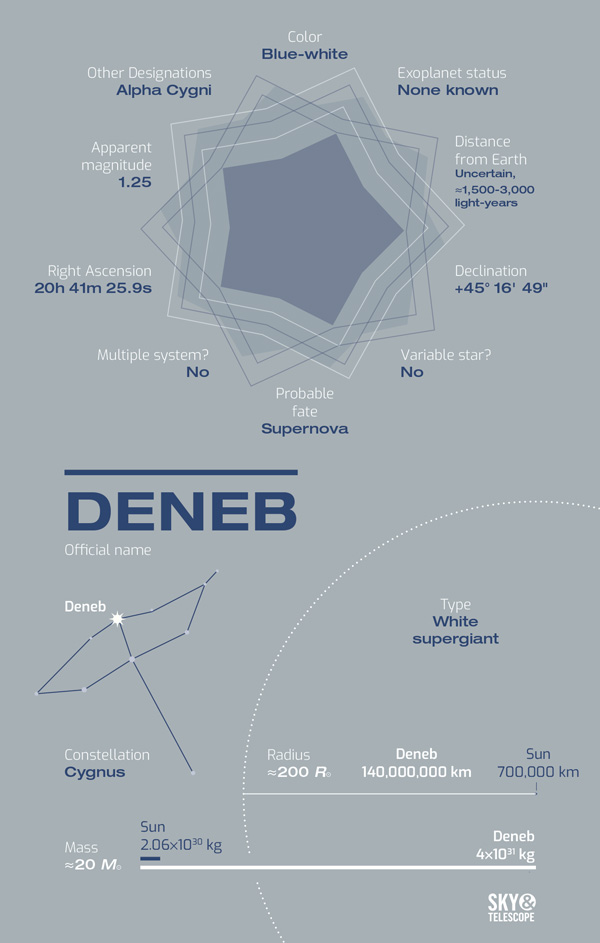 In physics, the inverse square law describes through mathematics what humans already perceive and understand intuitively: The farther away we are from a light source, the dimmer it appears. So it’s only a simple matter of logic to deduce that if a light source appears to be very bright, but is also known to be very far away, it must possess great luminosity.

Such is the case with Deneb, a 1st magnitude star and one of the most distant stars you can see without optical aid. Deneb is a bluish-white supergiant around 200 times the size of the Sun and burning through its fuel at a rapid rate.

Some well-known bright stars such as Vega, Sirius, and Alpha Centauri appear bright in our sky primarily because they are relatively close to us. While Vega and Sirius are certainly more luminous than the Sun, it’s the close distance (only 8.6 light-years for Sirius) that makes them seem so bright.

But for Deneb, the story is entirely different. This star appears bright not because it’s close — in fact, it’s very far away — but because it has enough luminosity to overcome great distance and still shine in our sky at magnitude 1.25. There is uncertainty surrounding Deneb’s distance from us, making it challenging to determine characteristics such as radius, mass, and others. But it’s estimated that the star is somewhere between 50,000 and 200,000 times as luminous as the Sun. Regardless of the precise luminosity, there is no doubt that this is a star with tremendous energy output. If Deneb could swap places with Vega, it would outshine Venus in our sky and cast shadows on Earth.

So how far away is it? That’s a tough question, and one that isn’t easy for astronomers to answer. The distance to some close stars can be determined using the parallax method — observing the star’s apparent shift in the sky relative to more distant stars as Earth orbits the Sun. But for faraway stars, the parallax method soon becomes inadequate. Some estimates have placed Deneb’s distance at a remote 2,600 or 3,000 light-years, while one analysis of data from the ESA’s Hipparcos (the “high precision parallax collecting satellite”) puts the figure closer to 1,500 light-years. The question of Deneb’s distance remains uncertain and might stay that way as, unfortunately, Deneb is too bright for the ESA’s more advanced Gaia satellite (the successor to Hipparcos).

But no matter the precise distance, there’s no question that Deneb is farther away than most of the familiar stars in our sky.

Deneb is located in the constellation Cygnus — a Latin form of the word “swan” that is in turn an adaptation of Greek. Deneb is located on what could be considered the “tail” of the swan. To the ancient Greeks, the constellation Cygnus featured in the telling of multiple competing tales involving swans. But it appears Cygnus didn’t represent a swan in all cultures. In Arabic, Deneb was known as the “tail of the hen” instead. In Chinese mythology, however, Deneb wasn’t a bird, but instead formed part of a bridge across a “river” — the Milky Way itself.

How to See Deneb

Deneb is the brightest star in Cygnus. Additionally, it’s an easily spotted member of two asterisms (groups of stars that aren’t official constellations): the Northern Cross and the Summer Triangle. The Northern Cross is simply an abbreviated version of Cygnus: the main body of the swan minus the ends of the wings and feet. The Summer Triangle — so called because it’s high in the sky during summer evenings — consists of Deneb, Vega, and Altair, making it an easy task to find the others once one star is located.

Observers with clear, dark skies will also note that Cygnus sits within the band of the Milky Way (remember, it’s a bridge crossing the Milky Way in Chinese myth). Deneb is high enough in the sky that it’s possible to view it year round in the Northern Hemisphere. (If you can wait until the year 9800, Deneb will take the place of Polaris as our North Star.) While you’re observing Deneb, keep in mind that you’re looking at an extremely powerful object that is considerably farther away than most other common stars.

Incredible star. That's one of many reasons why astronomy fascinates me so much.