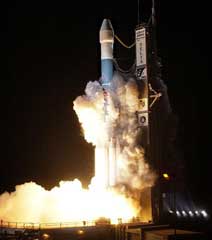 The Boeing Delta II rocket carrying the Messenger spacecraft lifts off at 2:15:56 a.m. EDT, August 3, 2004, from Cape Canaveral Air Force Station. Messenger will be the first spacecraft to orbit Mercury in March 2011.

After a one-day delay because of clouds from Hurricane Alex, NASA's seventh Discovery planetary mission is now on its way to the innermost planet. The Mercury Surface, Space Environment, Geochemistry, and Ranging mission, known as Messenger, lifted off from Cape Canaveral at 2:15:56 a.m. Eastern Daylight Time this morning, hitting its 12-second-long launch window. Within an hour of launch, the spacecraft had pushed away from Earth and entered solar orbit. Flight controllers report that the spacecraft is operating normally.

Messenger is to make the first visit to the innermost planet since Mariner 10 in 1975. Built by Johns Hopkins University's Applied Physics Laboratory, Messenger will make 15 orbits of the Sun before settling into a polar orbit around Mercury for a year of intensive observations, mapping the entire surface from as close as 200 kilometers and with image resolutions down to 250 meters. It will take the spacecraft several years to get there, however.

To reduce Messenger's velocity and allow it to move in toward the Sun, it will fly past Earth in August 2005, and then make flybys of Venus in October 2006 and June 2007. It will make its first flyby of Mercury in January 2008, and then perform two more in October 2008 and September 2009 before firing its engine to enter orbit around the iron planet in March 2011.

Messenger carries a camera, magnetometer, charged-particle detectors, X- and gamma-ray spectrometers (to determine surface composition), and a laser altimeter (to measure the heights of topographic features).

Planets Appear More Massive Than Disks Where They Form