There's a countdown clock in the control center at the Johns Hopkins University's Applied Physics Laboratory. It tells scientists and engineers the time remaining until their Messenger spacecraft enters orbit around the planet Mercury on March 18, 2011. 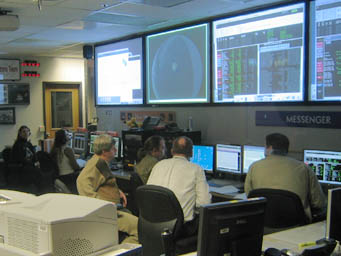 Auspiciously, today the clock rolled through "T-500 days." Maybe that milestone was the reason that Sean Solomon, the mission's principal investigator, chose to hold a press briefing today about results from the spacecraft's third and final flyby of the innermost planet. (I wouldn't put it past him!)

The September 29th visit provided the final gravitational tweak to the craft's trajectory, and in that overarching sense things went perfectly. Solomon notes that this was the most accurate flyby of the six executed by Messenger since its launch in August 2004. But he also conceded that a glitch in the on-board electronics occurred just as the craft closed to within 142 miles (228 km) of Mercury's night side. Any observations planned during the second half of the flyby — and that's a long list — were lost. (More on the significance of that miscue in a moment.)

Still, the science team has plenty to chew on, especially regarding the exosphere that envelops the planet. It's not really an atmosphere in the usual sense, because the ultrathin gas escapes readily to space and thus must be constantly replenished. Nor is the composition anything like what we're used to. There's sodium and potassium, which had been detected by observers on Earth, along with calcium and magnesium. These atoms are removed from the surface either by the intense sunlight, space radiation, or micrometeoritic bombardment. As investigator Ron Vervack Jr. (APL) succinctly summarized, "Something smacks into the surface and knocks stuff off." 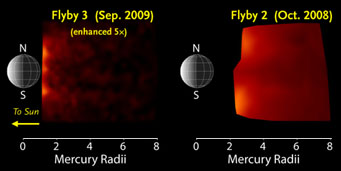 The amount of neutral sodium atoms in Mercury's exosphere was dramatically lower during Messenger's third flyby compared to the levels measured during its second flyby. Click on the image for a larger view.

Once "airborne," these atoms are either swept behind the planet by the sunlight's radiation pressure or become ionized by it. Vervack reported that the amount of exospheric sodium was only 5% to 10% that measured during the craft's second flyby, a falloff that had been expected due to Mercury's orbital location.

More puzzling is the interplay of the calcium and magnesium. "We are now seeing conclusively that the magnesium is behaving differently than the calcium," Vervack told me. They should behave similarly from a chemical standpoint and require a sizable kick to be launched from the surface — so why are their distribution in Mercury's exosphere so different? "High-energy processes should be doing the same thing to both, but they clearly are not," he continues. "We don't have an answer for why yet."

Vervack isn't the only Messenger investigator left scratching his head by Messenger's flybys. There's a growing mystery about what, exactly, is in the planet's surface rocks. Mercury has long been dubbed the Iron Planet, because its metallic core fills nearly half of Mercury's innards and accounts for at least 60% of its mass. Yet over the years ground-based spectroscopists have consistently seen the signatures of iron-poor silicates across the Mercurian landscape. That, in itself, is perplexing, given how much of the planet seems to be covered with volcanic flows. 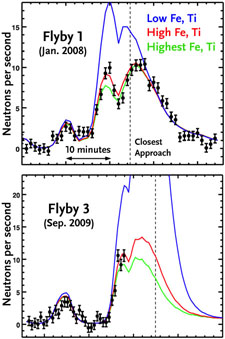 Neutron counts (black dots) made when the Messenger spacecraft was near Mercury suggest that the amount of iron and titanium in the planet's surface is quite high, based on fits to theoretical models. This unexpected result contradicts previous inferences that Mercuryâ€™s surface is low in these elements.

David J. Lawrence (APL) stirred the geochemical pot by announcing that there's likely a lot of iron, as well as titanium, on the planet's surface. "It's an exciting result," he says, "not one we expected."

The evidence comes from Messenger's neutron spectrometer, which has found a dearth of low-energy neutrons coming from Mercury. These neutrons arise when cosmic rays slam into the surface and smash atoms within the rocks to smithereens. Iron and titanium soak up the just-formed neutrons like little atomic sponges, so the low counts are telling us that the abundance of iron must be high — comparable to what's found in mare basalts on the Moon's near side (which is up to 14% by weight).

Lawrence explains that while iron would ordinarily combine readily to form rock-forming silicates in a cooling magma, under certain circumstances iron and titanium oxides might condense out first, leaving the silicates with little iron to incorporate. This would explain the iron-poor silicates inferred from telescopic observations, while still allowing the surface rocks to contain abundant iron.

The compositional maps that Messenger compiles once in orbit should eventually sort this all out, but for now the conundrum looms large. In the minds of the mission's geochemists, Question Number One is where all the iron came from that dominates Mercury's interior. The overall density is too high for this planet simply to have assembled from the mix of compounds present near the Sun when the solar system formed.

So one of three things happened: (1) somehow Mercury came together with a paucity of lower-density silicates, the kind found abundantly in Earth's crust; (2) it endured a period of extreme heating from the young Sun, which caused many elements simply to boil away; or (3) something really big collided with Mercury and stripped away the lion's share of its crust and mantle.

If (1) is correct, then the surface will be covered with a mixture of common minerals. By contrast, the evaporation model (2) would have left the planet depleted in "volatile" elements like potassium and sodium — but then what's the source of these atoms in the exosphere? If an impact is the cause, then the surface rocks should be enriched in iron.

So is Door Number 3 the correct one? Maybe, but not necessarily. The earlier flybys revealed that volcanic plains cover much of Mercury. So perhaps those dark iron-infused flows mask a crust with a markedly different composition.

No doubt the science team wishes the electronics hadn't gone flaky during the flyby's crucial moments — among the lost data were numerous targeted observations pairing the craft's cameras with a spectrograph that samples visible and near-infrared light at wavelengths diagnostic of iron and titanium-bearing silicate materials.

All was not lost, of course, since Messenger will have a chance to recoup those lost observations — and add thousands more — once it reaches Mercury for good … just 500 days from now.

Assuming that the Sun and the rest of the solar system's solid and gaseous features developed concurrently, it would seem that as the Sun grew in size and strength, its magnetism and/or gravity would increase as well and thus draw to its self and its nearby environment more and more of the heavy ferric components of the solar system. Could that have resulted in the outer-most planets to not have as much iron content compared with the rest of their chemical components? 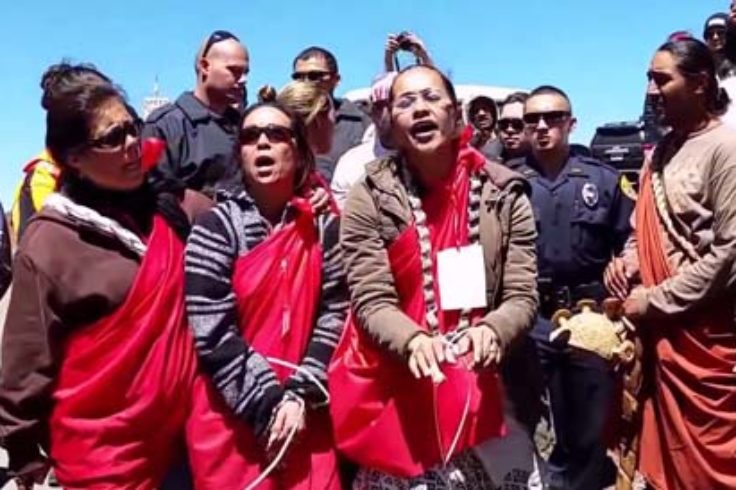