Whenever an interplanetary spacecraft reaches its destination, the most-sought results are typically pictures of the surface. And why not? After all, if we humans could have only one of our five senses, most of us would pick eyesight. But the four other senses work together with sight to give us the Big Picture, and likewise spacecraft typically carry a suite of instruments to provide a synergistic assessment. 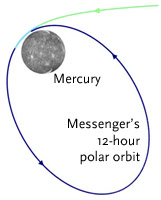 Why tell you all this? Well, yesterday NASA held a press briefing to bring everyone up to date on the Messenger mission. Plenty of new images were released, but just as intriguing (to me, at least) were the results from other instruments that have begun to reveal Mercury in surprising ways. In fact, much of what we thought we knew about Mercury — both from Mariner 10's first-ever flybys in the 1970s and from ground-based studies in the decades since — is likely wrong.

It's hard to believe, but it's already been three months since the spacecraft fired a braking rocket and slipped into orbit around Mercury. In fact, as principal investigator Sean Solomon noted yesterday, the craft has already completed a fourth of its basic mission.

Messenger (which, by the way, stands for Mercury Surface, Space Environment, Geochemistry and Ranging) circles the planet every 12 hours in a looping polar orbit. It's already endured its first "hot season", during which the probe's sunshade can reach temperatures as high as 660°F (350°C). 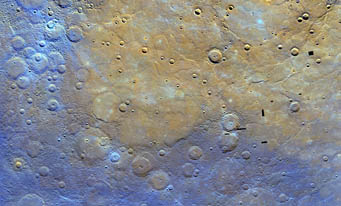 Among the eight experiments aboard is a camera, of course. But this one is equipped not only with wide and telephoto lenses but also with 11 filters optimized to isolate key aspects of the planet's geologic history and surface composition. Ever since Mariner 10, geologists have suspected that volcanism has played an important role in shaping Mercury's surface, and Messenger has confirmed that. The innermost planet has many broad lava plains that are miles thick in places.

But yesterday's briefing also highlighted important new compositional results from two lesser-known instruments: a spectrometer that records solar X rays bouncing off the surface, and the other a gamma-ray and neutron spectrometer.

The latter "works" only because Mercury is constantly bombarded by galactic cosmic rays; these slam into atomic nuclei, freeing up high-speed neutrons that, in turn, strike other atomic nuclei. These collisions create gamma rays of varying energy, depending on the elements that release them. Over time, the XRS creates a global map of elements with high atomic weights such as silicon, magnesium, and aluminum — precisely the ones that form rocks. 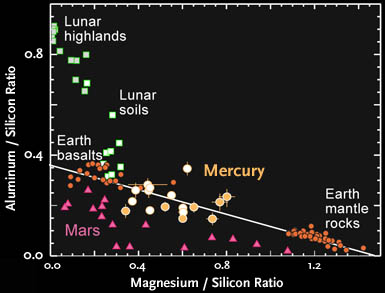 As deduced by Messenger's X-ray spectrometer, the major-element composition of Mercury's surface differs from representative rocks and soils from Earth, Moon, and Mars. Click here for a larger version.

According to Larry Nittler (Carnegie Institution of Washington), the Mercurian surface has high magnesium-to-silicon ratio unique among the terrestrial worlds. It's very unlike the lunar crust, which is dominated by a low-density rock "froth" that floated to the top when the infant Moon was largely molten. Rather, Mercury's exterior more closely resembles the mineralogy of Earth's mantle and seafloor. This is telling Nittler and his colleagues an important story about Mercury's formation and evolution, though so far they've only read the opening chapters.

More telling is the fact that the abundances of sulfur, potassium, and sodium are unexpectedly high. These elements are considered "volatile," meaning that they vaporize at relatively low temperatures, and their ubiquitous presence has immediate consequences for theories of how the innermost planet formed. 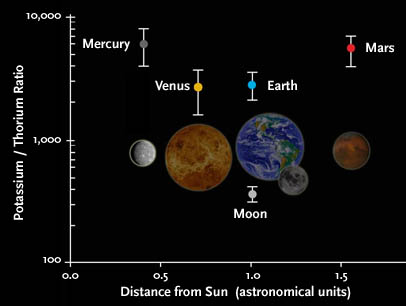 Messenger's gamma-ray and neutron spectrometer has found that Mercury's surface contains much more potassium than expected.

Mercury, you might recall, is nicknamed the Iron Planet because its high overall density implies that it's hiding a very large metallic core — an iron-rich cannonball that takes up three-fourths of its diameter and half its volume. So how'd it get that way? One theory holds that Mercury's initial composition was more Earthlike but, thanks to being blasted by a young and energetic Sun, its outer layers got so hot that they more or less vaporized. But this would have left the outer layers with very little sulfur, potassium, and sodium. So that theory has taken a devastating hit.

Another notion is that, somehow, Mercury was never Earthlike but instead assembled largely from metal-rich planetesimals. Such bodies exist: there's a metal-rich type of meteorite called CV chondrite. However, Nittler says, what Messenger is seeing at Mercury isn't a good match to those meteorites.

Still standing, among the major formation theories, is the "big splat" scenario. That is, Mercury was initially somewhat bigger, but early on the planet suffered a massive hit that stripped away most of its early crust and mantle, leaving behind its core and not much else. "Some of our data are consistent with this model," Nittler says, but it doesn't yet explain how the surface rocks ended up with roughly 10 times more sulfur (a few percent by weight) than exists on Earth or the Moon. 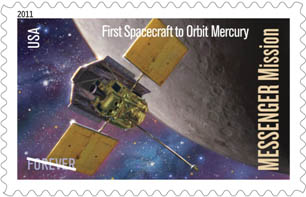 This first-class stamp, issued by the US Postal Service on May 4, 2011, commemorates the Messenger mission.

The Messenger team crammed a lot of information into yesterday's hour-long briefing, too much to recount in detail here. But one other result deserves a little space here.

Mariner 10 discovered that Mercury is the only terrestrial world (aside from Earth) with a substantial magnetic field. Undoubtedly the still-molten portion of its core is gurgling enough to create an electromagnetic dynamo. But Messenger's magnetometer finds that the source of this magnetic field is not dead center in its interior but rather offset toward the north pole by about 20% of Mercury's radius, or 300 miles (480 km).

This is interesting for (at least) two reasons. First, it suggests that the dynamo originates from somewhere nearer to the interior's core-mantle boundary. Second, the northward offset leaves the planet's southern hemisphere — particularly the real estate under the magnetic field's southern cusp, where field lines stretch open-endedly into interplanetary space —more vulnerable to bombardment by space radiation. In principle, this should lead to enhanced "space weathering" of the surface rocks there. Over time, Solomon says, the spacecraft should be able to determine if that's really the case.

By the way, to mark the occasion yesterday, Jim Green, NASA's chief of solar-system exploration, presented Solomon and the Messenger team with a first-day cover bearing the U.S. Postal Service's new "Forever" stamp that features Messenger. And why not? The mission is proceeding amazingly well, and there'll be many, many more revelations in the months ahead.

The math boys will have to sign in on this--but is there any chance that Mercury could be whats left of the body that hit the earth to form the Moon?

As ever, you are right on the money. How come NASA seems to keep the surface chemistry results for Mercury either under wraps or under-reported, or equivocal? - leaving us all guessing.

Many thanks for your clarity ...

If memory serves me, there was a competing theory in the 1970's to the dynamo origin for the then-postulated magnetic field of Mercury (Sharpe and Strangway). It was based on the idea of remnant magnetization i.e. as the iron-nickel core of Mercury cooled through the Curie point of iron in the presence of a strong solar magnetic field during Mercury's formation, a dipolar ( and higher moments ) magnetic field was frozen into Mercury. This model presumes that Mercury's internal temperature is cold today( less than 800C ) and solid. I recall there were also problems applying the dynamo theory to Mercury ( and the Moon ) due to its small size but this may be ancient history.