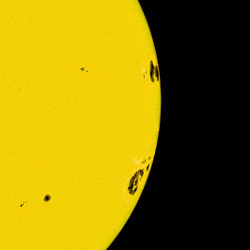 This SOHO image, acquired on November 3rd, shows the two gigantic naked-eye spot groups about to vanish behind the western (right) limb of the Sun. Active Region 10488 is the upper spot; the one below it is 10486. Both unleased solar flares on November 2nd, though the X8 flare from 10486 was the more powerful of the two.

Even as they disappear around the western limb of the Sun, two large sunspot groups spawned three powerful flares during an 18-hour period, and once again skywatchers in the world's mid- to northern latitudes should be on the lookout for aurora activity. This latest alert is in effect until early Tuesday morning (November 4th).

The previous blasts triggered beautiful displays of the aurora borealis over much of Europe and North America. During the early morning hours of October 29th, skywatchers as far south as California, New Mexico, Texas, and Florida were treated to colorful displays, while as darkness fell on Thursday (the 30th), observers witnessed luminous displays of red, green, and white in the evening sky.

This latest aurora alert is due to the eruption of three strong flares during a recent 18-hour period. The first, rated at X8, was generated at midday on November 2nd by the huge active sunspot region known as 10486, the lower of the two groups seen in the image above. Several hours later its companion (10488) produced a smaller X3 flare. A third flare erupted late in the afternoon of the 3rd. Although neither sunspot group directly faces Earth, the coronal mass ejections (CME) produced by the flares from each region are still expected to affect the Earth's magnetic field, possibly generating displays of the northern (and southern) lights during the evening of November 3rd–4th. 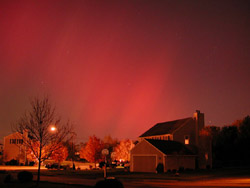 The sky over Boston glowed red early Thursday evening (October 30th), thanks to an impressive aurora display generated by a powerful solar flare emitted by sunspot group 10486. Sky & Telescope editors Imelda B. Joson and Edwin L. Aguirre used a Coolpix 990 digital camera at f/3.5 (ISO 200) and an 8-second exposure to capture this image from their light-polluted driveway northwest of Boston.

None of the three recent flares is as powerful as the two blasts unleashed last week by active region 10486. The October 29th solar flare was rated at X11, while the eruption on the 28th was rated at X17 — the third strongest solar flare recorded since at least 1976.

You can view the latest solar images from the SOHO spacecraft (click on "Latest Images," then "Near real time images)." Also check out SOHO's MPEG movies of spots and coronal mass ejections.