As astronomical meccas go, the Boston area might not be Mauna Kea or Kitt Peak, but it's right up there.

Most impressive is the Harvard-Smithsonian Center for Astrophysics, a sprawling mini-campus that's home to 350 card-carrying astronomers. Heck, it's even got its own bowling league. MIT, Boston University, Wellesley College, and Tufts all have astronomy departments. NASA even had a field center there until 1970, and today Cambridge is home to the control center for the space agency's Chandra X-ray Observatory.

Observatory-wise, the pickings are more modest because most of these institutions have access to mega-facilities around the world — or, in Chandra's case, out of it. The historic refractors at Harvard are just for show these days, and several years ago it mothballed the 61-inch reflector at its suburban Oak Ridge station (though a new 72-inch "light bucket" scope on the site is doing an optical-SETI survey). MIT maintains a modest (24-inch) teaching telescope at its Wallace Observatory, and Wellesley does likewise at Whitin Observatory. 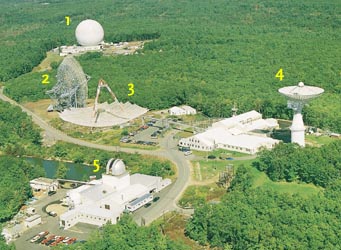 But Haystack Observatory is an entirely different animal. Nestled 30 miles from the city in the wooded recesses that straddle the Westford-Groton line, it's home to the premier collection of radio and radar telescopes in eastern North America. Operated by MIT's Lincoln Laboratory, Haystack is unusual in that its research is partly civilian and partly defense-related.

For example, during its heyday in the 1960s, the observatory's radar-equipped dishes pinged the surfaces of the Moon, Mercury, Venus, and Mars. Astronomers have used its radio dishes for decades to identify complex molecules in interstellar space, while other researchers exploited its radar capability to probe Earth's upper atmosphere. Since 1967, the facility's civilian research has been managed by the nonprofit Northeast Radio Observatory Corporation (NEROC), a consortium of nine colleges and research institutions.

The facility includes two giant open-air dishes for radar, collectively known as Millstone Hill. One is a fully steerable antenna with a diameter of 150 feet (46 m); its big brother, which always points straight up, is 220 feet (67 m) across. These use a technique called incoherent scatter radar to map ions and electrons in the ionosphere out to distances of 600 miles (1,000 km). You can read more about the Millstone Hill research here. 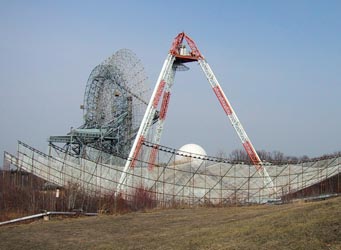 The two radar telescopes at Millstone Hill. In the foreground is a zenith-pointing dish with an aperture of 220 feet (67 m). Behind it is a fully steerable antenna with a diameter of 150 feet (46 m). In the distance behind them is the white radome for Haystack Radio Observatory. Click here for a larger image.

One of the most bizarre chapters in the observatory's illustrious history came in 1963. The Space Age was in its infancy, but aerospace engineers were keen to advance the promise of satellite-based communication any way they could. Project West Ford was one such effort. It attempted to create a radio-relaying "mirror" by girding Earth with hundreds of millions of copper needles that served as miniature dipole antennas. I am not making this up. There were two launches; one in 1961 failed when the needles wouldn't deploy. Fortunately for the future of space exploration, the technology was quickly superceded, the experiment wasn't repeated, and all those the little dipoles eventually dropped back harmlessly into the upper atmosphere.

Project West Ford garnered a lot of publicity at the time, but since Haystack's inception in 1960, many of its astronomers and electrical engineers have worked on the kinds of projects they can't tell their families and friends about. Most of these involve satellite surveillance, using high-powered radar to "illuminate" the shapes and other characteristics of spacecraft (mostly the unfriendly ones) in Earth orbit.

The big gun in this regard is a 121-foot (37-m) fully steerable radar antenna that's housed under a 150-foot-wide metal-frame radome, the largest in the world. Right now the Haystack Radio Telescope is midway through an 18-month overhaul to replace the dish and install a new radar system. In order to do this work, the top of the radome had to be removed — and to do that the contractor brought in a 600-ton, 400-foot-tall crane. 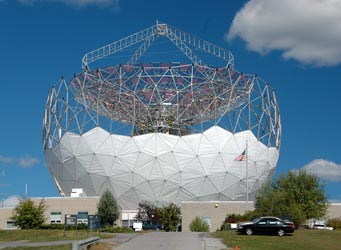 To replace the 120-foot (37-m) Haystack Radio Telescope, seen here with its new framework, construction crews needed to remove much of the weatherproof radome that encloses it. Click here for a larger view.

When I visited the site a month ago, the 55-ton cap was sitting off to one side, and crews were scurrying all over the newly installed telescope support structure. Since then they've replaced the radome's cap, and soon they'll get to work on installing a new high-precision dish. Its surface shape will be accurate to within 0.1 mm, truly amazing given its size and mass.

Along the road up to Haystack's big white bubble is a small, unassuming dome atop a large building. But looks can be deceiving. Inside the dome is a 48-inch (1.2-m) optical telescope that played a role during the tests by the Strategic Defense Initiative Organization — a.k.a. "Star Wars" — during the 1980s. 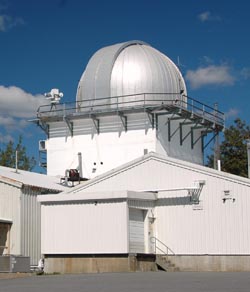 This unassuming dome-and-building complex houses the Firepond telescope at Haystack Observatory, which was used during the 1980s to test high-powered infrared lasers for satellite reconnaissance.

The idea was to use a powerful infrared laser to "light up" enemy satellites flying overhead. The powerful laser system needed a huge building to house its amplifier — and a large adjacent pond provided water to cool the electronics. The Firepond Optical Facility ended its stint as a super-secret reconnaissance project in 1994, and these days it's used for probing mid-level atmospheric characteristics.

Let me note two other dishes at the Haystack facility. One, adjacent to Firepond, is a tall, gleaming-white steerable radio antenna, 85 feet (26 m) across, used for satellite tracking. The other, the Westford Radio Telescope, is a "modest" 60-foot (18.3-m) radio dish enclosed in a radome. Built in 1961, these days it's used for Very Long Baseline Interferometry, or VLBI. The signals it receives get combined with those from other dishes scattered across the globe to create the resolving power of continent-sized apertures.

In future installments, I'll give you more background about Project West Ford, Firepond, and the spiffy new Haystack Radio Telescope. But if you're too eager to wait for those, check out the observatory's website.