Think about how little time it takes to blink your eyes. It's about a third of a second, more or less. Now imagine looking for something far briefer — a single event lasting just 0.0005 second — in a "haystack" of nearly 500 hours of archived data recorded by a radio telescope. 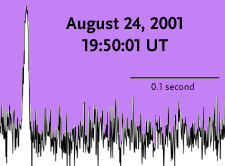 The brief but obvious pulse near the left edge lasted no more than 0.005 second but was 100 times stronger than the detection threshold of the radio telescope that recorded it.

Does your head hurt yet? Now you have some appreciation of the impressive discovery announced in this week's online edition of Science magazine. A team of five astronomers led by Duncan Lorimer of West Virginia University has identified an incredibly brief burst of radio energy from some unknown but powerful and distant source.

David Narkevic, an undergraduate student working for Lorimer, stumbled upon the pulse while searching for the signatures of pulsars in an archive of radio data recorded some years ago by the 210-foot-wide Parkes radio telescope in Australia. But the brief burst he found is not from a pulsar — it's a solitary blip. It doesn't appear in other Parkes scans made in the same sky location before or afterward, nor did it make an encore showing in two sets of follow-up observations made since the initial discovery.

Neither Lorimer nor anyone else who's seen the radio pulse can explain it. Perhaps it represents an entirely new astronomical phenomenon. The source is within a few degrees of the Small Magellanic Cloud, but it doesn't appear to have come from the SMC or from anywhere in the Milky Way. Instead, it has all the hallmarks of a radio burst that's been traveling across intergalactic space for a very, very long time. A source just 1,000 miles across and 3 billion light-years away is not out of the question.

Regardless of what triggered the radio burst, Lorimer's team estimates that more of them should turn up in other pulsar surveys recorded with the Parkes telescope. And the researchers are understandably titillated by what they've found. As noted in their article's conclusion, "The potential of [using] a population of radio bursts at cosmological distances to probe the ionized intergalactic medium is very exciting."

You can read more about this extragalactic enigma in the press release issued by the National Radio Astronomy Observatory.

Long long time ago, in a galaxy far far away.