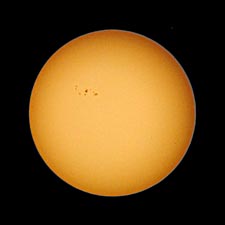 The Sun sports a large complex of spots this week. All you need to view it is a safe solar filter. A telescope helps, but the spot group is so large you can see it without one. This image was obtained on July 14th through a Tele Vue-85 refractor equipped with a Thousand Oaks Polymer-Plus filter.

A giant sunspot complex is marching across the Sun's face this week, much to the delight of avid skywatchers. The spot group is so large it is visible without magnification — all you need to see it is a sunny day and a safe solar filter. Of course, a telescope makes the view all the more spectacular.

The spot group, designated active region 10030 by the U.S. National Oceanic and Atmospheric Administration (NOAA), is one of the largest of the current solar cycle. It features a complex, twisted magnetic field and has spawned numerous solar flares, including a very energetic ("X-class") flare earlier today. The chain of large and small spots spans about 220,000 kilometers (136,000 miles), or 17 Earth diameters. 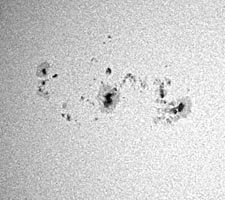 A close-up of the giant sunspot group as it appeared on July 13th. As you watch the complex from day to day, you can see the shapes and relative positions of the spots change.

The Sun turns on its axis roughly once a month, so active region 10030, having just crossed the center of the solar disk, should remain visible for several more days. Solar astronomers are monitoring it closely using ground-based telescopes and orbiting satellites, since powerful flares could produce geomagnetic storms and disrupt radio communications here on Earth.