According to a time-honored tradition in astronomy, anyone who discovers an asteroid gets the naming rights. Of course, few of us have that kind of good fortune — in fact, given the success of automated search programs, it's increasingly rare that an individual observer finds a previously unknown space rock. 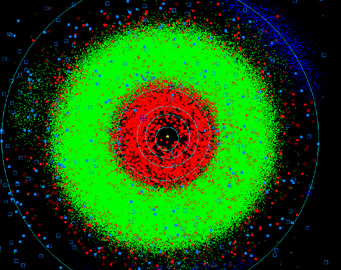 A plot of main-belt (green), near-Earth (red), and Trojan (blue) asteroids as of February 2010. Click here for a larger version and here to see the plot in motion.

But you'd be surprised how many asteroids are awaiting names. Of the roughly half million known asteroids, about half — 239,797 as of last month — have official numbers (which happens once an asteroid's orbit is reliably determined) and thus qualify for naming. Yet only about 15,000 of these have names. The discovery teams just don't have time to pick suitable appellations — I suppose they've run out of friends and family members to honor. Then the International Astronomical Union's 15-person Committee on Small-Body Nomenclature (CSBN) has to approve all the submissions.

Given this overload, it was a pleasant surprise to learn about a friendly competition designed to let students submit suggestions for minor-planet monikers. "Naming X" was inspired by Venetia Burney Phair, the 11-year-old English girl who in 1930 suggested the name "Pluto" for Clyde Tombaugh's famous find. 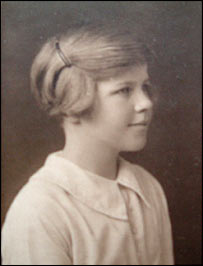 In 1930, 11-year-old Venetia Burney suggested the name Pluto for a new planet found beyond Neptune.

The contest has three entry categories: kids up to age 11, kids 12 or older, and school groups. Submission guidelines are the same ones that astronomers follow: your suggested name can't have more than 16 characters; it has to be pronounceable; modern-day politicians are off limits; and resist the urge to immortalize your pet. Be sure to check that it hasn't already been used.

Submit your entry by May 30th, after which the judges (led by David Levy, Ian Morison, and Marc Buie) will select up to five winners and announce them on June 14th. "There's a high probability that at least one or two objects will be named," Heenatigala tells me.

So what are you waiting for? Get all the details here.

At what point do we stop naming all the asteroids as opposed to having just a tracking number? After all, we long ago stopped naming stars except for first and second magnitude.

It has to stop somewhere as it obviously has for craters on the Moon.

One difference, of course, is that asteroids move and so need to have something that connects their past and current positions.

Why not sell the right to name an asteroid to the general public? Seriously! People are willing to shell out good money to fraudulent firms to name a star after their deceased child, so they ought to be willing to fork over money for a nearby rock (maybe even one that will make the news some day!). Corporations are willing to pay lots of money to name sports arenas after themselves, so how about Asteroid PepsiCola (and DietPepsi, and PepsiLite, and...)? Never underestimate the ego draw of putting your name on something! I'm sure that the IAU could make a tidy little profit that could be plowed back into supporting basic research and the IDA around the world.

A very important correction to your article: this contest is NOT just for kids. The 12+ category has no upper limit. Anyone can and is encouraged to enter. A very special thank you to Thilina for clarifying this.