Crowd sourcing has a long history in astronomy, not least when it comes to naming missions and instruments. Both NASA’s Mars rover Curiosity and the Chandra X-Ray Observatory have taken their names from public submissions (Chandra began as the Advanced X-ray Astrophysics Facility, or AXAF). Now there’s a whole collection of radio antennas trolling for a new identity. 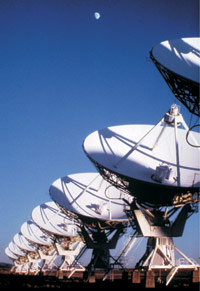 The Very Large Array, a segment of which is shown here, is looking for a new name to go with its second lease on life.


Image courtesy of NRAO / AUI
The National Radio Astronomy Observatory is looking for a new handle for the new-and-improved Very Large Array. The array might look familiar from its cameo in Contact; since its dedication in 1980 the suite of telescopes has contributed to studies of pulsars, black holes, and water in the distant universe, among other things. The 27 radio antennas aren’t gaining any new members, but the project’s becoming an international collaboration with the addition of Canadian and Mexican patronage, and the 1970s-era electronics have been completely replaced. The result is the transitionally named Extended Very Large Array.

The upgrade’s goal is to improve all observational capabilities, except for spatial resolution, by at least a factor of 10. The makeover will allow the array to observe everywhere between 1 and 50 GHz (there were some gaps before). Expanding this radio coverage will let astronomers look at a wider range of redshifts, which gives researchers access to different parts of the universe’s history.

There are two options for name submissions: you can suggest a “free form” name — that is, basically anything you can type — or just a prefix to go in front of “Very Large Array.” Entries will be accepted through December 1st and the new name will debut at the American Astronomical Society meeting in Austin this January, where yours truly will be listening.

Submit a name to the VLA contest.

Let's at least mention the VLA's location — it's in my state of New Mexico near the town of Socorro! I have visited it and it is stunning to see the whole array up close. They also have a very educational self-guided walking tour open to the public.

Sweet to know! I suggested a name of Socorro because of the city its next to.

I just turned in my suggestion: SOCORRO (SOcorro COlaborative Radio aRay Observatory). That works as both a free form and acronym with VLA tacked to the end of it. I'll keep my fingers crossed.