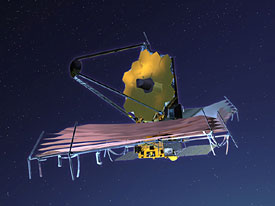 The infrared-optimized James Webb Space Telescope is designed to study the highly redshifted light from the first stars and galaxies formed after the Big Bang. Ballooning costs threaten to shrink its primary mirror from 6.5 meters to 4 and eliminate at least one of its scientific instruments, much to astronomers' dismay. The tennis-court-size rectangular structure at bottom is a sunshade.

Astronomers are riding an emotional roller coaster. Last month they were elated when NASA's new administrator, Michael D. Griffin, restarted work on a possible shuttle mission to extend the life of the Hubble Space Telescope. This month they're in despair over news that future space-astronomy missions may be downsized, delayed, or cancelled because of a financial crisis within the agency.

In a recent letter to Congress, Griffin noted that NASA's budget for the current year falls about $2 billion short of what's needed to keep all current programs on track. Reasons for the imbalance include cost overruns in the shuttle return-to-flight effort and in several space-science missions, congressionally mandated expenditures ("earmarks," otherwise known as "pork"), and the resumption of preparations for servicing Hubble. Testifying before a Senate subcommittee on May 12th, Griffin admitted that "identifying offsets needed to fund these items has created some difficult choices."

Among the projects whose timelines will be stretched out are the Space Interferometry Mission and Terrestrial Planet Finder, advanced space telescopes designed to explore planets around other stars beginning in 2011 (SIM) and sometime between 2012 and 2015 (TPF). Griffin says he doesn't yet know the extent of these delays. NASA's Mars Science Lab, a long-duration rover now slated for launch in 2009, may slip to 2011.

By far the worst problem for astronomers concerns the James Webb Space Telescope (JWST), a 6.5-meter (256-inch) infrared observatory sometimes called Hubble's successor. It's a joint project of NASA, the European Space Agency, and the Canadian Space Agency. Various hurdles seem destined to delay its launch by at least a year, to no earlier than 2012, and threaten to increase the mission's cost by as much as $1 billion, to more than $3 billion. In response, NASA has asked the project to consider whether a 4-meter telescope with fewer scientific instruments could be flown instead. According to one astronomer on the Webb team, who asked to remain anonymous, "such an observatory would not be worth continuing with" because it wouldn't be able to compete scientifically with the next generation of giant ground-based telescopes except in a narrow range of infrared wavelengths. "None of us believe it'd save the required amount of money anyway."

At this point it's anybody's guess what will happen to Webb. If NASA can't scrounge enough extra money to continue the project in its current form, perhaps by taking it from another mission, outright cancellation is a very real possibility. "I don't know the technical and budget path we'll find," says senior project scientist John Mather (NASA/Goddard Space Flight Center), "but the JWST project management and science team are extremely determined to find a solution in working with our international partners and NASA Headquarters."