Before dawn yesterday, an enormous mechanized crawler bearing the Space Shuttle Atlantis inched its way to a launch pad at NASA's Kennedy Space Center, in preparation for a liftoff now planned for May 12th. 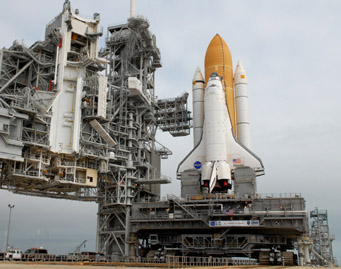 On March 31, 2009, NASA engineers moved the Space Shuttle Atlantis to Launch Pad 39A at the Kennedy Space Center in Florida.

On this mission, STS 125, astronauts will rendezvous with the Hubble Space Telescope and then spend more than a week installing two new instruments and replacing everything they can before bidding the observatory adieu for the fifth and final time.

In the wake of the loss of Columbia six years ago, it seemed like Hubble might not ever get this last house call. NASA's administrator at the time, Sean O'Keefe, felt the risk of an HST servicing mission outweighed the gain — and he nixed it. Astronomers breathed a collective sigh of relief when Michael Griffin, who replaced O'Keefe in 2005, put the servicing mission back on track.

Atlantis and its crew were supposed to rocket skyward last October. But a key component failed on the telescope just 17 days before the scheduled liftoff — the shuttle was already being readied on the launch pad. Hubble scientists had a spare sitting in storage, so NASA managers delayed the repair mission until the replacement could be readied.

Here's how the orbits of fragments from the collision of two satellites in February 2009 are likely to evolve, based on models by orbital-debris specialists at NASA's Johnson Space Center.

Now it's déjà vu all over again. Atlantis is back on Pad 39A in Florida, and its crew arrives in Florida today for equipment checks and some final training. After STS 125, NASA plans only seven more shuttle flights — all of them to the International Space Station.

Yesterday's rollout signals that, for the moment, NASA managers are satisfied that debris from a satellite smash-up back on February 10th does not pose too great a safety risk. They emerged thumbs-up from an assessment last week, even though the count of tracked fragments from the collision of Iridium 33 and Cosmos 2251 has risen to 823.

According to Nicholas Johnson, an orbital-debris specialist at NASA's Johnson Space Center, the collision's fragments quickly spread through altitudes from 120 to 1,000 miles (200 to 1,600 km). Hubble's circular orbit is about 350 miles (560 km) up. As the animation here shows, the danger to the servicing mission (and to HST itself) is only likely to grow in the months ahead, as the fragments' orbits spread out.