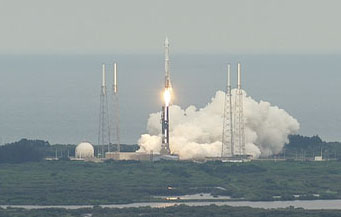 A NASA television camera captured the June 18, 2009, launch of an Atlas booster carrying the Lunar Reconnaissance Orbiter and its companion LCROSS spacecraft.

The successful sendoff marks the space agency's first step in its much-anticipated return to lunar exploration — a program that might carry astronauts to the Moon's surface in as little as 10 years.

Yet, remarkably, the LRO-LCROSS combo is only the second NASA-sponsored lunar mission since the Apollo landings ended more than 36 years ago. (The only other flight was Lunar Prospector, in 1998–99.)

For the moment the two spacecraft are safely in a parking orbit around Earth. But soon the powerful Centaur final stage will power both out of Earth's gravitational grip and toward the Moon. Then LRO will separate. Five days from now both will swing close past the Moon; LRO will take up a looping polar orbit that will gradually tighten in the weeks ahead. Meanwhile, the Centaur and still-attached LCROSS, an acronym for Lunar Crater Observation and Sensing Satellite, will take up a far larger orbit with a period of about 37 days.

LRO's mission is to use its seven instruments to map and survey the Moon with unprecedented detail — a tall order considering the stiff competition being provided by India's Chandrayaan 1 orbiter and, until recently, by Japan's Kaguya and China's Chang'e 1.

That's great science, but what space junkies like me are anticipating most is when the Centaur and LCROSS plow into a yet-to-be-specified crater at one of the lunar poles sometime between October 7th and 11th. The hope is that these kamikaze impacts — closely watched by telescopes big and small on Earth, the Hubble Space Telescope, and LRO itself — will heave hundreds of tons of lunar dust into telescopic view. If that happens, the ensuing observations should settle a longstanding debate about whether frozen water lies hidden in the permanently shadowed recesses of the lunar poles.

In four more months, I hope to learn the answer!

This is truly one of the most wonderful gifts we, as human beings could ever have wanted, the opportunity to visit other heavenly bodies. But why the Moon? Have we not already been there? Have we been there!? Why is it that after 40 years of waiting for a mission we go to the moon again? Last night we watched Dr. Zubrin's Mars Underground. I was shocked to see they have not even considered the missions. We won't be able to progress as long as financing stands in the way of Technology. Profit is the evil here. I wanna go to Mars!!!!!!
lol. Friday morning ramblings....

What is the expected resolution of the digital imaging in the survey? Will we be able to identify/ see any of the objects left by the prior lunar missions?

It's a minor matter, but still frustrating, that the first word of the article is "Today"--and one has to scroll to the end of the article to find out just when 'today' was. The best solution would be to put the dateline at the top of the article. If that's not possible, perhaps authors could define 'today' (and related terms) when they use them. Thank you.

The LRO will have the resolution to image the Apollo landers. Hopefully, NASA will deem this worthy of their time. But even if they do, many will claim they faked the images, too.