Today marks the 50th anniversary of the foundation of NASA. In 1958 the U.S. Congress established the National Aeronautics and Space Administration by transforming the four-decade-old National Advisory Committee for Aeronautics (NACA). The new agency didn't begin operations for two more months, however. So, look for another anniversary milestone on October 1st. 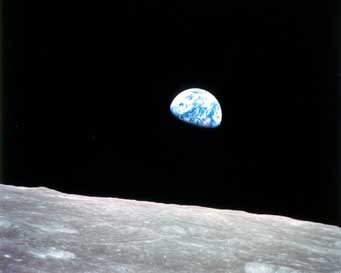 The "Earthrise" photograph taken by the astronauts of Apollo 8 in 1968 is one of the epochal images of the Space Age. It's just one of tens of thousands of pictures available at the NASA Images website.

With NASA at 50, you're bound to see all manner of remembrances. During just the past few months, I've seen several TV series and documentaries about the space program.

Last week, NASA announced another birthday-worthy resource: a searchable archive of space photography at NASA Images. This is a cooperative effort with NASA and the Internet Archive, where you can find all manner of interesting stuff, including old movies and the famed "Wayback Machine" that will show you what many websites looked like oh, so long ago.

After receiving the press release last Thursday, I eagerly went to the site, but didn't get much further than the opening screen. The following days were better, but I still run into slowness. As I was writing this, I got the error message: "NASA Images is experiencing high load, please wait 30 seconds and reload."

The site is a bit different than the NASA Planetary Photojournal or other image repositories. NASA Images is set up like "light box" software, in which you search through the database using keywords to display thumbnails images, and then you save them to your "workspace." This is the electronic version of laying out slides on a light box. With thousands of images to pore over, it's a good way of keeping track of the images you might be interested in without losing track of some of them. And it's not just photos; there are movies too.

Of the images I looked at and downloaded, the pictures were of decent size for computer-display use (about a megapixel). So they would be great for a school project, newsletters, or a PowerPoint presentation, but barely enough resolution for, say, publishing very large in Sky & Telescope.

The site offers ways of embedding the images into a website of your own and otherwise sharing images you find with friends, but I didn't attempt either of these features.

There's lots to look through at the site — and all public domain! Happy hunting.

I believe it was Emerson who said, "A foolish consistency is the hobgoblin of little minds." Nowhere is this more true than in spelling. As a dweller of the Internet, I have received e-mails and read posts on my astronomy club's webpage and I wonder about the state of education in this country...there seem to be no rules of spelling anymore:the use of their, there and they're (among many other synonyms)seems to show no understanding of their meanings or origins. I apologize for the rant, but in paragraph 5 of your post you say:

"With thousands of images to pore over, it's a good way of keeping track of the images you might be interested in without losing track of some of them."

So often one sees the word "pour" used in this context; it is refreshing to see the word "pore"(a hole in the skin or material or to scrutinize intently) used by you correctly!

Thanks so much for a great article on a wonderful government entity that has given us so much and delivered excellence under the transparent scrutiny of the world for fifty years! Your erudition does you and Sky & Telescope proud.

So many pictures to choose the most impressive, beautiful, favorite, spectacular, and... For me the most spectacular: Earthrise by Apollo 8 and Pale Blue Dot of Earth shot from 5.5 billion km by Voyager 1 spacecraft. The most impressive: comparison from last part of BBC series "Life of The Mammals": footprint of man left in dust on the Moon (Apollo) aligned together with footprint left by our far ancestor on the shore of ancient lake some 3.5 million years ago. Our origin and ultimate future.

LOL You SHOULD apologize for the rant. "Their", "there", and "they're" are homonyms, not synonyms. If you're going to rant, get it right, please.