Imagine an astronaut that can work tirelessly 24 hours a day, seven days a week — without needing food, drink, or oxygen. 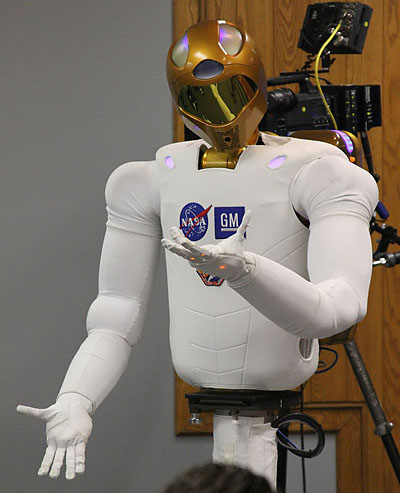 That’s the vision behind Robonaut 2, NASA’s first human-like robotic astronaut, which is set to be launched into space aboard Space Shuttle Discovery this Thursday, February 24th, at 4:50 p.m. EST from Launch Pad 39A on Cape Canaveral, Florida.

A joint project of NASA and General Motors, the $2.5 million robot — fondly called R2 — is designed to assist human astronauts aboard the International Space Station. Although its primary task on this flight is to demonstrate to engineers on the ground how humanoid robots behave in space, an upgraded version of R2 may someday venture outside the space station and help spacewalkers perform routine maintenance and emergency repair work, and even conduct scientific observations.

R2 was scheduled to be delivered to the space station last November by the six-member crew of Discovery during its 11-day STS-133 mission, along with the station’s supplies, spare parts, the Leonardo Permanent Multipurpose Module and the Express Logistics Carrier 4, an external platform that will hold large equipment. However, a hydrogen fuel leak in the shuttle’s 15-story external fuel tank as well as cracks in the tank’s support structure and foam insulation forced a 3½-month delay in Discovery’s launch so it can undergo critical repairs. 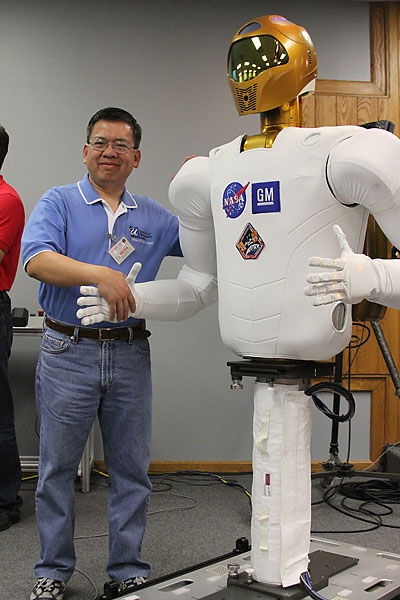 We had a chance to see R2 up close during a pre-launch news briefing held November 2nd at the Kennedy Space Center in Cape Canaveral, Fla. There we joined the nearly 100 journalists in the press auditorium as NASA and GM engineers demonstrated R2’s capabilities, dexterity, and artificial intelligence.

At one point, the robot showed its strength and endurance by picking up a 20-pound barbell and holding the weight steady with its arm fully extended, as a young male volunteer from the robotics team struggled to keep up.

It was amazing to see the robot in action! R2 really impressed everyone with the human-like movement of its arms and fingers. It’s science fiction turned to reality. All the robot needs now is a voice so it can communicate verbally, and a pair of legs for added mobility.
Here’s the video we shot of R2’s demo.

Robonaut 2 measures 3 feet, 4inches from waist to head, and weighs 330 pounds. It’s made primarily of aluminum, with some steel and nonmetallic components, and has 38 PowerPC processors and more than 350 sensors. There are no plans to bring R2 home. It will become a permanent resident of the space station. Click here for more information about the robonaut program. 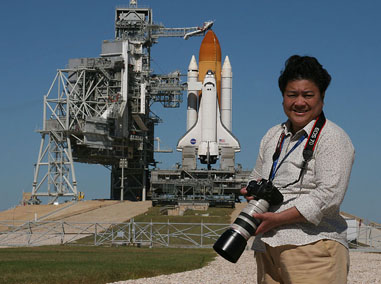 Coauthor Imelda Joson poses with the space shuttle Discovery, which is poised for liftoff at Launch Pad 39A on Cape Canaveral, Florida.

STS 133 is the first shuttle mission for 2011 and the 35th shuttle flight to the space station. Only two other flights remain this year before the shuttle fleet finally retires after three decades of service — STS 134 (Endeavour), tentatively set for launch on April 19th, and STS-135 (Atlantis), which is slated for liftoff on June 28th.
Click here for NASA’s launch blog and mission updates.