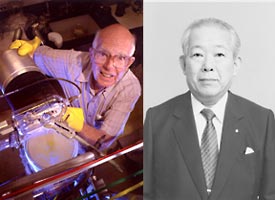 Raymond Davis Jr. (left) and Masatoshi Koshiba won the 2002 Nobel Prize in physics for their work studying the neutrino.

The 2002 Nobel Prize in physics will be shared by three researchers who opened up two new fields of astronomical investigation — one that uses telescopes in space, and the other that uses detectors deep underground.

Raymond Davis Jr. (University of Pennsylvania) and Masatoshi Koshiba (University of Tokyo) have been honored for their work in pioneering the study of neutrinos. Davis built the first neutrino detector in the early 1950s. Although billions of neutrinos rain down from space, they interact with matter so infrequently that they pass completely through the Earth. While working at Brookhaven National Laboratory, Davis devised a way of capturing a few neutrinos by setting a trap of chlorine solution. He was able to count the individual atoms of argon that resulted when a chlorine atom absorbed a neutrino.

Davis later scaled up his experiment in the hopes of finding neutrinos from the Sun. He built a larger tank filled with chlorine-based cleaning fluid 1.5 kilometers underground in the Homestake Gold Mine in South Dakota. During the 15 years of operation, he found 2,000 neutrinos. Although Davis did detect neutrinos from the Sun, his results puzzled astronomers: the subterranean telescope found much fewer neutrinos than expected.

It was the work by his corecipient that eventually led to solving this dilemma. Koshiba built another type of underground subatomic-particle detector. The Kamiokande experiment was originally devised to detect proton decay and featured a giant tank of ultrapure water surrounded by sensitive photomultiplier tubes. In 1986, the tubes were further enhanced so they would capture the fleeting light created as neutrinos collided with water molecules. The renamed Super Kamiokande detector identified neutrinos from the Sun and Supernova 1987A. Furthermore, from its data, combined with observations from the similarly designed Sudbury Neutrino Observatory in Canada, researchers were able to confirm that these subatomic particles have mass and can change back and forth between their different "flavors." This solved the "missing neutrino" problem because Davis's apparatus could only detect one type of neutrino. 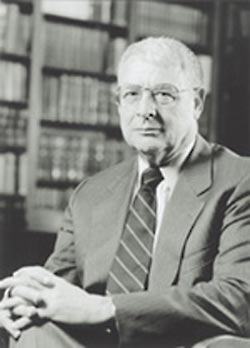 The other half of the Nobel Prize goes to Riccardo Giacconi (Associated Universities, Inc.), who designed the first instruments to detect X-rays coming from space. His initial detectors flew aboard suborbital rockets. This led to ever-more sensitive orbiting observatories — among them, Uhuru in 1970, the Einstein X-ray Observatory in 1978, and the ongoing Chandra X-ray Observatory. X-ray astronomy has revealed the existence of black holes, hot gas amid clusters of galaxies, and even emission from comets.

The Nobel Prize recipients will share the cash award of 10 million Swedish Kronor (about $1 million); Giacconi will get half, Davis and Koshiba will share the other half.