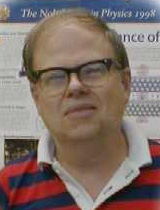 Thanks to a generous gift from astronomer Carlson R. Chambliss, the American Astronomical Society will bestow an annual award for significant contributions to research by an amateur astronomer.

The American Astronomical Society (AAS) has taken a major step forward in recognizing the valuable role of backyard stargazers in advancing the science of astronomy. Beginning in 2007, the AAS — one of the world's largest and most prestigious associations of professional astronomers — will offer an annual prize for cosmic research by a North American amateur. Named for Carlson R. Chambliss (Kutztown University, Pennsylvania), who donated the funds to support the prize, the Chambliss Amateur Achievement Award will consist of a 224-gram (½-lb) silver medal and $1,000 cash.

Equipped with computerized telescopes, ultrasensitive CCD cameras, powerful software, and plenty of time and energy to devote to their hobby, more and more amateur astronomers are making significant contributions to research. Among their many productive activities, backyard observers measure asteroid rotation rates, monitor the brightenings and fadings of variable stars, track exoplanets crossing their host stars, and record the visible-light counterparts of gamma-ray bursts in distant galaxies. Recognizing that amateurs and pros have much to offer each other, the AAS established its Working Group on Professional-Amateur Collaboration (WGPAC) in 1999 and made it permanent in 2003. Members of the WGPAC will help choose recipients of the Chambliss Award. 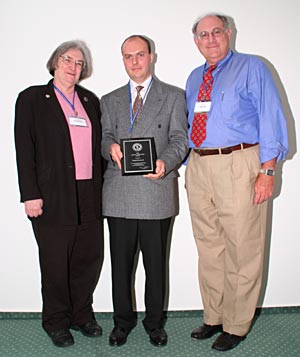 Czech amateur Kamil Hornoch accepts his achievement award from Mary Kay Hemenway and Michael Bennett, the secretary and executive director, respectively, of the Astronomical Society of the Pacific.

Nominations for the first award, which will be presented at the society's January meeting in Seattle in January 2007, are being accepted until October 1, 2006, via the AAS Web site. Only AAS members may submit nominations, so if you know of a prospective nominee (or consider yourself one!), you'll need to find a AAS member at a nearby university or through an affiliated organization like the Astronomical League, the Astronomical Society of the Pacific (ASP), the American Association of Variable Star Observers (AAVSO), the Association of Lunar and Planetary Observers (ALPO), or the Society for Astronomical Sciences (SAS).

The ASP also makes an annual award for amateur achievement and has done so since 1979. This year's recipient received his prize at the International Astronomical Union's General Assembly in Prague last month. The venue was convenient because the winner, Kamil Hornoch, lives in the Czech Republic! He was cited for making thousands of high-precision visual and CCD measurements of the positions and brightnesses of comets, asteroids, and variable stars, and for discovering seven novae in the Andromeda Galaxy. "His work is characterized by a professional level of carefulness and high reliability and accuracy," said the ASP in Hornoch's citation.