Long, long ago, when I was a college student, my profs taught me about stellar black holes, the remains of collapsed stars so dense and massive (3 to 15 Suns's worth) that not even light could escape from them. Then along came evidence for "supermassive black holes," hoarding millions or billions of times the Sun's mass, and by the 1990s it became clear that these behemoths must lurk at the center of most galaxies.

Several years ago astronomers began to speculate about the existence of a third class of supercompact object that, heft-wise, lies somewhere in between. The evidence for these intermediate-mass black holes was largely circumstantial: an ultra-luminous stream of X rays coming from inside a galaxy — but not from its center. The candidates included sources in the famous globular cluster Omega Centauri and in Messier 81 (Bode's Galaxy).

But no observer could make an ironclad case for an IMBH. Skeptics argued that these beacons could simply be stellar-mass black holes that are beaming X-ray jets at Earth, thus appearing more massive than they actually are. Or they could be massive white-dwarf stars gobbling matter from companions at a furious rate, belching copious X rays in the process. Or they could even be unrelated X-ray sources juxtaposed either directly in front or behind the candidate galaxy. 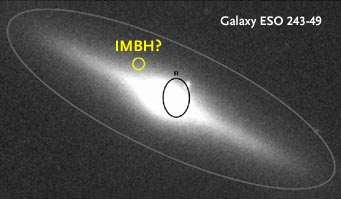 In this red-light image obtained with the Very Large Telescope, a yellow circle marks the location of a putative intermediate-mass black hole designated HLX-1. The black oval shows the positional uncertainty of a strong radio source coming from the host galaxy, whose extent is indicated by the gray oval.

Now observers have come forward with two candidates that represent the strongest cases yet for midsize black holes.

The first, reported in Nature for July 2nd, involves the edge-on spiral galaxy ESO 243-49 in the southern constellation Phoenix. Observers led by Sean Farrell (now at the University of Leicester) first identified it in a 2004 X-ray survey compiled by XMM-Newton, a European space observatory launched in 1999. When the researchers made a follow-up observation last November, they found that their target had dimmed and its X-ray spectrum had changed.

Dubbed HLX-1 (for Hyper-Luminous X-rays), the source is offset from the galaxy's center by about 8 arcseconds. Farrell and his colleagues believe they've ruled out alternate explanations like X-ray beaming, a voracious white dwarf, or a binary neutron star. They can't completely dismiss a more distant X-ray beacon coincidentally aligned with the galaxy — there's a 1-in-11 chance of that. 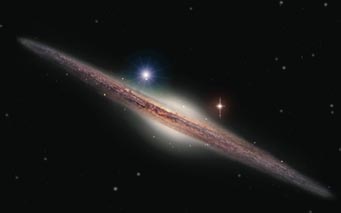 Artistâ€™s impression of the X-ray beacon HLX-1 (starburst to upper left of the galactic bulge) in the edge-on spiral galaxy ESO 243-49. Astronomers believe HLX-1 is likely an intermediate-mass black hole weighing in at 500 Suns or more.

But if it really belongs to ESO 243-49, then Farrell's team estimates that it's a black hole with (based on its X-ray brightness) at least 500 times the Sun's mass.

"There is indeed something new here," notes black-hole specialist Richard Mushotzky (NASA-Goddard Space Flight Center). This object is so luminous and its X-ray spectrum so well constrained, he explains, that it cannot be anything but a high-energy source withing the host galaxy. And its luminosity is so high that even taking "unreasonable" values for beaming it still needs a large mass. "So it's the largest pink elephant in the room," Mushotzky concludes.

A second strong candidate has been identified by Rodrigo Ibata (University of Strasbourg) and others, who're making their claim in a paper submitted to Astrophysical Journal Letters. This time the host is a globular cluster, Messier 54, which is embedded in the Sagittarius dwarf galaxy.

Ibata's team used the Very Large Telescope in Chile to measure the orbital velocities of stars whirling tightly around the cluster's densely packed core. The high speeds observed argue that they're circling something quite massive. But what is it? Ibata and his colleagues admit that one explanation is a central crush of stars in peculiar orbits. But if it's an IMBH, then its mass must be about 9,400 Suns. Observations with the Chandra X-ray Observatory, which found a bright source at the same location, appear to back up this claim.

This estimated mass is strikingly similar to that of the candidate object at the center of Omega Centauri, a globular that astronomers suspect is what remains of a galaxy stripped of everything but its core. The same fate has been suggested for the Sagittarius dwarf galaxy. So might M54 be the core of a once-larger system, the decimated loser of an intergalactic fight?