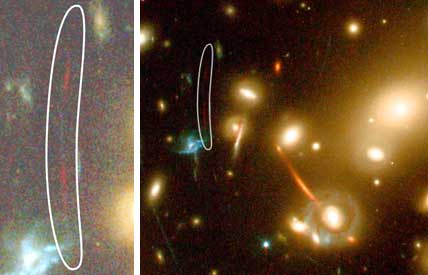 The highlighted orange arc in this image taken by the Hubble Space Telescope's Advanced Camera for Surveys represent the stretched image of a galaxy some 13 billion light-years away from Earth. Light from the galaxy has been distorted by the gravitational-lensing effects of the intervening galaxy cluster Abell 2218.

In the ever-changing realm of astronomical superlatives, the rank of "most distant" climbed another notch last weekend with the announcement of the most distant galaxy (for now). Astronomers using the W. M. Keck Telescopes atop Mauna Kea and the Hubble Space Telescope imaged a galaxy that lies about 13 billion light-years away, directly behind the galaxy cluster Abell 2218 in Draco.

Hubble has photographed Abell 2218 before (in 1995 and 2000), revealing a region rich with ethereal arcs scattered among the galaxies. Each arc is a celestial mirage: the refracted image of a background galaxy smeared and brightened by the gravitational-lensing effects of the cluster’s member galaxies.

The new, deeper view of Abell 2218 taken by Jean-Paul Kneib (Caltech and Observatoire Midi-Pyrénées) and his colleagues reveals a previously unseen reddened arc. Analysis of spectra taken by Hubble and Keck determined that the galaxy has a redshift of about 7, meaning that the star system is seen as it was only 750 million years after the Big Bang. This represents the earliest example of star formation yet observed. Details of the study will appear in the Astrophysical Journal.

Or course, records are meant to be broken. Astronomers using instruments such as the Spitzer Space Telescope and the Chandra X-ray Observatory could turn up objects with redshifts of 8 or 9, and possibly 10.