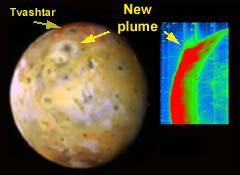 A towering new volcano on Io, unknown prior to Galileo's close-range flyby on August 6th, created both a 700-kilometer-wide ring (left) and an umbrella-shaped plume extending to a height of at least 500 km (right). The nearby volcano Tvashtar Patera was unexpectedly dormant during the flyby.

Courtesy University of Arizona and NASA.

Two months ago, as NASA's Galileo spacecraft closed in
on Jupiter's moon Io, mission scientists tingled with anticipation.
The flyby on August 6th (Universal Time) was designed to send the spacecraft
skirting just 194 kilometers (120 miles) from the colorful moon's surface
and, specifically, through the plume of a vigorously erupting volcano
named Tvashtar Patera. During the spacecraft's previous
visits Tvashtar had been spewing matter skyward to a height of nearly
400 km.

Unfortunately, Tvashtar remained disappointingly quiescent
during the encounter. But Io still offered a stupendous display for
the visiting spacecraft, in the form of an entirely new eruption, some
600 km to Tvashtar's south. Just-released Galileo images show that the
unnamed volcano was shooting its umbrella-shaped plume to heights of
at least 500 km, making it the tallest plume yet found among the moon's
ever-changing surface. Measurements taken by Galileo's infrared mapper
should eventually yield the eruption's temperature and some constraints
on its composition.

Luckily, Galileo's trajectory carried it through the new
volcano's towering plume, affording its plasma experiment a whiff of
the "strong breath" spewed skyward from the surface. According to plasma
investigator Louis A. Frank (University of Iowa), the exhaled particles
appear to be microscopic snowflakes formed by clumped molecules of sulfur
dioxide. Frank and his team hope to deduce the plume's velocity and
temperature — important clues about what powers the eruption.

To date most of the volcanic activity has been confined
to regions near Io's equator. But this new eruption (41° north,
133° west), together with the far-northern volcanoes of Tvashtar
and Dazhbog Patera (also seen erupting in August), may signal a change
in the moon's internal stirrings. The spacecraft gets another chance
to examine Io close up on October
16th, and a final flyby not yet
funded) to occur next January 17th.