Opticians are working to transform an enormous, 42-ton slab of glass into a first-rate primary mirror for the 6-meter Large Altazimuth Telescope. 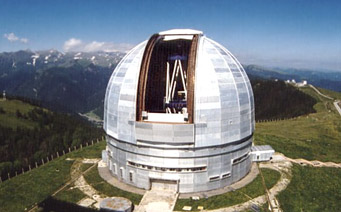 With an aperture of 238 inches (6 m), the Bolshoi Teleskop Azimutal'ny (Large Altazimuth Telescope) ranked as the world's largest optical reflector from 1975 until 1993. Its huge enclosure is 174 feet (58 m) high.

For nearly 20 years, from 1975 until the completion of the Keck I telescope in 1993, Russia (or, officially, the Soviet Union) had the world's largest optical telescope. Situated on Mount Pastukhov in the Caucasus Mountains, between the Black and Caspian seas, the Bolshoi Teleskop Azimutal'ny — Large Altazimuth Telescope — has a primary mirror 238 inches (6.05 m) across. Conceived in 1960 to dethrone the 200-inch Hale Telescope on Palomar Mountain, the BTA gave Russian astronomers serious bragging rights.

But while it might have been the biggest reflector, it was never really the best. For one thing, Mount Pastukhov has proved notorious for poor atmospheric seeing, strong winds, and changeable weather. Also the reflector's immense dome, 174 feet (58 m) high, is spacious to a fault. All that steel and concrete makes it nearly impossible to match the temperature inside with what's outside, degrading the optical performance further. While other observatories routinely boast of sub-arcsecond seeing, an astronomer using the BTA is lucky to get 1-arcsecond performance. (The average seeing is 1½ arcseconds.) This degrades the big eye's value for imaging tasks, though its enormous light grasp is well suited for spectroscopy of faint cosmic sources. 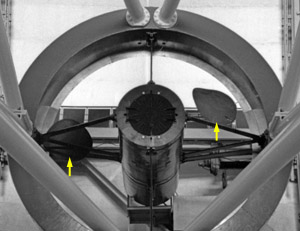 Installed in 1975, the BTA's original primary mirror was so poor in quality that astronomers hung large pieces of black cloth (arrows) at the telescope's skyward end to block off its most serious optical defects.

All those woes might have been tolerable were it not for the quality of the telescope's optics, which have been subpar from the outset. The first blank cast for the BTA was a disaster. Opticians at the Lytkarino Optical Glass Factory, near Moscow, didn't have much experience with large optics and annealed it too quickly, which created cracks and bubbles that rendered it useless.

A second blank turned out better, but not great. Once installed in the BTA, the mirror showed significant imperfections. The staff resorted to blocking sections of the optical path with black cloth. A third primary, with no cracks and a more precise surface, was installed in August 1978.

But the BTA's optical problems weren't over. According to Aleksei Moiseev, an astronomer at the Russian Academy of Sciences' Special Astrophysical Observatory (which operates the telescope), the primary's surface has gradually degraded from the multiple washings with alkali-based solvents, used prior to applying a fresh coating of aluminum. "It will be impossible to put new fresh reflective layer without repolishing the mirror," Moiseev explains. But that would mean considerable downtime, bringing the 6-m telescope's crowded observing schedule to a standstill.

Originally SAO engineers had hoped to replace the mirror with one made of low-expansion ceramic glass, which would have lessened the nagging thermal problems. There was no money for that, however, so instead they hatched a plan to refurbish the original mirror — which had sat in storage for nearly 30 years! 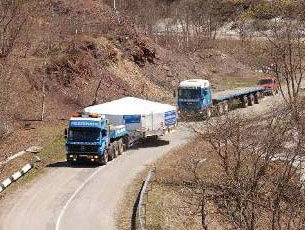 A truck slowly descends through the Caucasus Mountains in 2007, the first leg of the 6-m mirror's return to Moscow for refurbishment.

In mid-2007, the original 42-ton mirror was gingerly transported down through the Caucasus range and returned to Lytkarino, a trek that took 3½ weeks. Then opticians tackled the surface imperfections the only way they could: they ground them off!

Katerina Kuchaeva, one of SAO's assistant directors, recently sent me an update on the mirror's 5-million-euro overhaul. A milling machine has removed 8 mm of glass (more than a half ton!) from the upper surface, taking with that all of the optical imperfections. Now it's a matter of refiguring and repolishing. "New optical technologies make it possible to reconstruct the surface of the 6-m mirror," she explains, "eliminating the existing defects and creating a practically ideal parabolic surface, thereby significantly increasing the angular resolution of the mirror."

William Keel, a University of Alabama cosmologist who got to use the BTA in 1990, has been monitoring the effort. "To remove 8 mm of surface from a 6-m primary seems like a lot, but that does give them the ability to rescue the existing mirror and not have to shut the operations down to do so," he notes. "And they can benefit from measurement and figuring techniques that are very new compared to 1975." 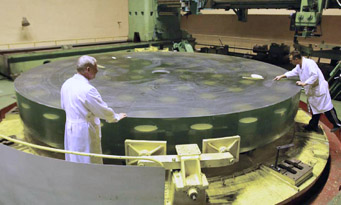 Opticians prepare to remove the topmost 8 mm of glass — and, with it, a host of imperfections — from the original 6-meter primary mirror for Russia's Bolshoi Teleskop Azimutal'ny (Large Altazimuth Telescope).

According to Kuchaeva, SAO's schedule calls for the refurbished primary to return to the observatory in mid-2013, where it'll be coated with aluminum and swapped in for the existing mirror. That will surely be a red-letter day for Russian astronomers, who have struggled to get stable funding and state-of-the-art resources since the breakup of the Soviet Union. Perhaps then the "Cyclops of the Caucasus" will take its rightful place as one of the world's truly great telescopes.

For more information about the refurishment effort, go to page 32 of the SAO annual report for 2007-08 and check out Lytkarino's press release. You can also watch the 6-m BTA telescope in operation.

I hope this innovative and resourceful plan will succeed. The Russians deserve some good news. And the whole world will benefit from the improvement of a really big telescope.