Late last week scientists from many countries gathered at the foot of the Andes to inaugurate the Pierre Auger Observatory in Malargüe, Argentina. 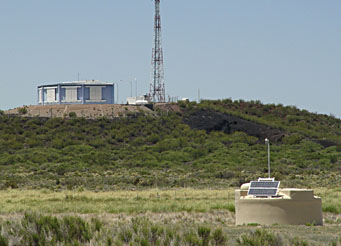 The Pierre Auger Observatory records the arrival of ultrahigh-energy cosmic rays in two ways. On the hill is one of its four fluorescence-detector buildings and a communications tower. At lower right is one of the 1,600 water-filled surface detectors.

This event marked the completion of a vast complex of cosmic-ray detectors — 1,600 of them, spread across some 1,200 square miles (3,000 square kilometers) — designed to detect the collision of ultrahigh-energy particles with Earth's atmosphere and to deduce their origin. The most potent cosmic rays, which are atomic nuclei traveling at relativistic speeds, can carry up to 10 million times more kinetic energy than those created in particle accelerators on Earth.

When a potent cosmic ray strikes Earth, it slams into the nucleus of a gas molecule high in the atmosphere. This collision triggers a chain reaction of secondary particles (termed an air shower) that cascade down to lower levels. Cosmic rays strike our planet constantly, but the most powerful ones — packing 10 million trillion electron volts — are extremely rare. On average, only one of these arrives over each square kilometer of ground per year.

The Pierre Auger Observatory, named a pioneering French cosmic-ray researcher, employs two independent methods to detect and study high-energy cosmic rays. One technique senses the light emitted when secondary particles interact with water one or more of the 1,600 tanks. The other method records ultraviolet light emitted high in the atmosphere during each air shower. (You can learn more about the air showers and their detection here.)

I'll bet the celebration in Argentina had the feel of a new company that made its first big sale a year before the official grand opening. Construction of Pierre Auger Observatory began in 2000, and it went online in 2004 with only about half of its detectors in place. By late last year its researchers had deduced that the most powerful cosmic rays come appear to emanate from active galactic nuclei (AGNs), ultrabright objects powered by supermassive black holes.

So far, the $53 million Pierre Auger Observatory has involved more than 350 physicists from 70 institutions in 17 countries. However, there's more work to be done. A second field of detectors will also be built in southeastern Colorado, providing sky coverage on both sides of the equator.