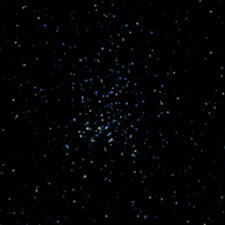 Selected by color and magnitude, stars from the Sloan Digital Sky Survey photometric database clump together to reveal a faint Milky Way companion galaxy in the direction of Boötes.

In recent years, astronomers have discovered a handful of dwarf galaxies right next door in the extended halo of the Milky Way, obscured by the gas and dust of our galactic plane. Now, astronomers sifting through data from the Sloan Digital Sky Survey (SDSS) have announced the discovery of two sparse, low-luminosity Milky Way neighbors.
Both dwarf satellite galaxies are invisible in most telescopes.

Daniel Zucker (Cambridge University, England) discovered the first one while poring over the survey data. He noticed an overdensity of distant stars in the constellation Canes Venatici (CVn). Comprised of predominantly old stars, the CVn dwarf is located about 640,000 light-years away. "Its distance makes it one of the most remote of the Milky Way's companion galaxies," says Zucker. With a diameter of more than 5,000 light-years, it is also one of the largest Milky Way dwarf spheroidal satellites.

Only hours after the announcement, Zucker's fellow SDSS researcher and Cambridge colleague, Vasily Belokurov, announced his own discovery of an even fainter dwarf galaxy in Boötes. Dubbed "Boo," the ultra-faint galaxy shines with a luminosity of only 10,000 Suns. At a distance of about 196,000 light-years, its absolute magnitude is –5.7, which makes it the least luminous galaxy known. The previous record holder was discovered in 2005 in Ursa Major.

Until now, astronomers had identified 10 dwarf companions to the Milky Way, not including the Large and Small Magellanic Clouds. The dwarfs have remained hidden because they are thinly scattered, obscured by dust, and sometimes spread across tens of degrees of sky. Sorting out these loose clusters by color and magnitude from Milky Way foreground stars is a painstaking task.

Moreover, astronomers have a hard time classifying these clumps. Companion galaxies are typically in various stages of being torn asunder by their revolutions around the Milky Way. Debate continues on whether an overdensity of stars in Canis Major, for example, is part of the Milky Way's warped outer disk or part of a larger, mostly dissolved dwarf galaxy.

In some cases, a stream of stars may be all that's left. In March, Carl Grillmair (Caltech) and Roberta Johnson (California State University, Long Beach) reported in Astrophysical Journal Letters their detection of a "river of stars" streaming across 45° of the northern sky. The narrow stream is approximately 76,000 light-years away, forming a giant arc across the Milky Way's disk. The feature appears to be a result of gravitational tides stripping the globular cluster NGC 5466.

Boo, too, appears to be a distorted structure that has likely been battered by the Milky Way's gravitational tides. Because of the dwarf's extent and apparent dynamics, the survey team ruled out the possibility that Boo is the remains of a globular cluster. The structure and motion of satellite galaxies such as CVn and Boo help us better understand the properties of dark matter and galaxy interactions. "One of the biggest surprises of the SDSS is the galactic science that is being produced," says SDSS survey colleague Don Schneider (Penn State University).

As astonishing as it seems that galaxies so nearby have gone undetected until now, astronomers agree that the Boo and CVn discoveries are just the tip of the iceberg. Zucker, Belokurov, and their colleagues report in papers submitted to Astrophysical Journal Letters that the discovery of such faint galaxies in proximity to us indicates that many more remain to be found.