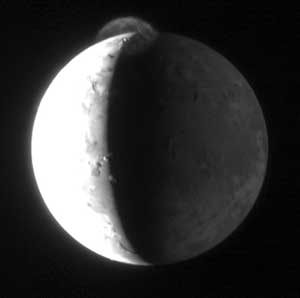 The dayside of Io was overexposed to capture detail in the 330-kilometer (200-mile) high plume of the volcano Tvashtar. More images of it and other volcanoes on the volatile moon are expected as additional data from New Horizons will be sent back to Earth in coming weeks.

When NASA’s Pluto-bound New Horizons spacecraft flew by Jupiter in February, the primary goal was to get a speed boost to the outer solar system. It used the giant planet’s gravity to kick it 4 kilometers per second faster (up to 23 km per second, or 51,000 miles per hour) so it would reach Pluto in 2015. Mission planners also took the opportunity to give the spacecraft’s instruments a full shakedown by scrutinizing Jupiter and its moons.

A few images were made public shortly after the flyby, but planetary scientists described additional details Tuesday at a press conference in which “lucky” was the word of the day.

Among the fortuitous happenstances was the eruption of Tvashtar volcano on Io. It’s located near the moon’s north pole, making its plume visible throughout the flyby. Io received a lot of attention as it was imaged by New Horizons’ suite of instruments. The flyby revealed several erupting volcanoes and other hot spots. One area was dubbed a “mystery volcano” because images show incandescent lava, but there’s no known volcano there. An image taken in Jupiter’s shadow revealed gas in Io’s atmosphere set aglow by interactions with Jupiter’s magnetic field. 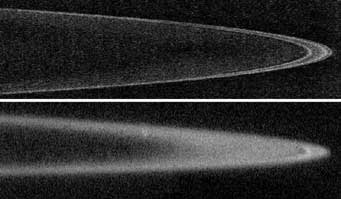 The New Horizons spacecraft took the best images of Jupiterâ€™s charcoal-black rings as it approached and then looked back at Jupiter. The top image was taken on approach and shows three well-defined lanes of gravel- to boulder-size material. The lower image looks back in a direction toward the Sun and shows backscattering from dust-size particles. Click on the image for a larger view.

The scientists also thanked luck’s graces in how the trajectory of New Horizons takes it down Jupiter’s magnetotail, the wake of the planet’s magnetosphere as it’s pushed back by solar wind. No spacecraft has sampled this region of space directly, and New Horizon will collect data through June.

New Horizons made more than 700 observations (more than currently planned for Pluto and its three moons) and there’s still more data to come. Only 70% of what the spacecraft recorded has been transmitted to Earth.

See the New Horizons website for additional pictures and details.