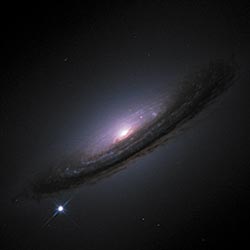 A Type Ia supernova, 1994D, exploded 10 years ago in the outskirts of the galaxy NGC 4526 in Virgo. It brightened to magnitude 11.8 and was visible in amateur telescopes. Such nearby Type Ia explosions help to calibrate their intrinsic brightnesses, allowing astronomers to measure the distances of much more remote ones far across the cosmos.

A group of astronomers led by a co-discoverer of the "dark energy" pervading the cosmos has come forth with new results that begin to suggest how it actually works.

Dark energy is the mysterious force causing the expansion of the universe to speed up, as discovered in 1998. Adam Riess (Space Telescope Science Institute) and 18 colleagues have been tracking the expansion history of the universe using distant Type Ia supernovae as standard candles. On February 20th they announced measuring 16 new Type Ia's that they found in Hubble Space Telescope images, some with redshifts as great as 1.6. From these observations, the team determined that the universe clearly started accelerating about 4 to 6 billion years ago (at roughly redshift 0.5). This was when the density of matter thinned out enough, due to cosmic expansion, for the dark-energy repulsion to start overpowering matter's self-gravity.

The real prize would be to find the dark energy's "equation of state," a quantity knows as w, and whether this is changing with time. In other words, is dark energy some fundamental property of space, one that exerts a constant force per cubic centimeter regardless of how space expands? If so, it would be like Albert Einstein's idea, put forth in 1920, of a "cosmological constant," with w fixed at a value of –1. Or is dark energy something in space, such as exotic particles that thin out as the universe expands, causing a changing force for acceleration? Such a hypothetical substance has been named "quintessence."

The difference is crucial to the cosmic future. In the former case, the universe will expand relatively gently forever, allowing stars, galaxies, and clusters of galaxies to hold together indefinitely. But quintessence could result in a "Big Rip," in which space eventually accelerates so fast that every star, planet, and even atom is torn apart — or a "Big Crunch," in which the force reverses direction and yanks space back into a sort of reverse Big Bang.

Riess and colleagues say their new findings mildly favor the cosmological-constant model over quintessence; they find that w = –1 to an accuracy of about 15 percent, with no sign of any change — though the question is far from settled. But in any case, people making long-term plans can relax. The astronomers do say their results so far rule out either a Big Rip or a Big Crunch for at least the next 30 billion years.

The group plans to continue hunting for and collecting data on extremely distant supernovae, something can be done only with the Hubble Space Telescope. Their paper will appear in the Astrophysical Journal in June.