The Chicxulub impact crater is buried beneath roughly 1,000 meters of sediment (vertical scale is exaggerated). The Yaxcopoil-1 drilling effort intended to sample a variety of rocks resulting from the impact itself.

It's been 11 years since geologists pinpointed the location of a huge impact that, most of them believe, led to the demise of the dinosaurs. The crater lies at the tip of the Yucatán Peninsula, centered on a coastal village named Chicxulub Puerto. There, 65 million years ago, a chunk of asteroid or comet roughly 10 kilometers across slammed into Earth and gouged out a hole at least 180 kilometers (115 miles) across. Evidence of this catastrophic event has turned up worldwide, even in Antarctica.

However, identifying the crater and getting at it are two very different things. Today the lies completely buried under 1,000 meters of limestone sediment. Initially, impact specialists thought they'd caught a fortuitous break with the realization that Pemex, the Mexican national oil company, had drilled a series of deep exploratory wells in the region beginning in 1951. But calamity struck in 1979, when a warehouse fire destroyed all but a few fragments of the extracted-rock well cores. 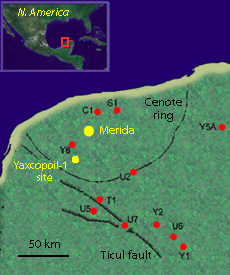 Prior to the Yaxcopoil effort, many exploratory wells (red dots) had been drilled in the northern Yucatán Peninsula. But a fire destroyed virtually all of those cores in 1979.

For the last three months, the grinding whir of drilling once again echoed over the region's scrubby jungle. The new effort, located on the Yaxcopoil hacienda about 40 km southwest of provincial capital of Mérida, began optimistically on December 3rd with the hope of reaching a depth of at least 1,800 meters (5,900 feet). By mid-January the scientists were buoyed with some good news: the drill had punched through 800 meters of overlying limestone and into suevite, a fragmented mixture of target rock and quenched blobs ejected by the impact.

But on January 20th, "we had a bad day," reports Burkhard Dressler (Humboldt University, Berlin), who supervised the drilling and core recovery. The drill bit became hopelessly stuck, idling the project for nearly three weeks. Work resumed 'round-the-clock on February 7th, but with the cost capped at $1.5 million, precious time had been lost. The final core came up late on the 23rd, from a depth of 1,510 meters. "At the furious daily pace they [were] drilling," observes participant David A. Kring (University of Arizona), "we could have potentially reached 2.5 km if the drill did not get stuck."

Although pleased with the results, the project's scientists would have liked to get their hands on more of the impact-related layers near the crater's floor (the suevite proved only temporary, and the drilling continued through limestone and sulfate-rich anyhydrite sediments until the end). "Although the units are thinner than we would have liked, they look spectacular," Kring notes. He explains that choosing the Yaxcopoil site represented a compromise, because the team feared it would not reach the rock under "melt sheet" closer to the crater's center. In the end, the melt sheet itself eluded the effort anyway. 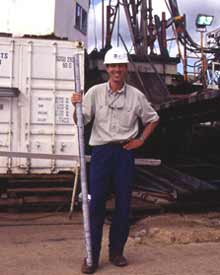 Investigator David A. Kring holds a rock core recovered from a depth of about 1,300 meters (4,200 feet). It consists mostly of anhydrite, a calcium-sulfate sediment layer that either represent a mammoth block of rock mixed with the crater's impact debris or the crater's fractured floor.

Still, Kring says, "We are getting the best core ever obtained of the target lithologies. Consequently, we will be able to extract additional information about the CO