New Stars in a Galaxy's Wake

Like a pixie trailing fairy dust that makes flowers bloom, a lone galaxy is shedding gas that's forming stars as it plunges toward the center of a massive galaxy cluster. 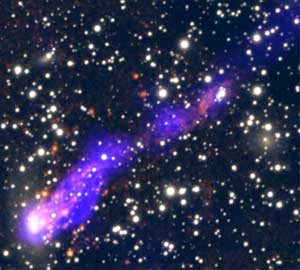 A composite view of X-ray (blue) and hydrogen-alpha observations (red) of galaxy ESO 137-001 display a tail of fresh stars. Material is being stripped away from the galaxy as it plunges to the center of galaxy cluster Abell 3627.

The speedy galaxy, dubbed ESO 137-001, is located in the cluster Abell 3627 more than 200 million light-years away in Triangulum Australe.

The astronomers counted 29 regions of glowing hydrogen gas — indicative of star-forming regions — near the galaxy, all of which lie "downstream."

"This isn't the first time that stars have been seen to form between galaxies," explains Donahue. "But the amount of stars forming here is unprecedented." It's unusual for gas escaping a galaxy to be dense enough to allow stars to coalesce on their own.

For more details, see the NASA press release or the full paper to be published in the Astrophysical Journal in December.