This animation contrasts the LMC in visible light and ultraviolet wavelengths. Notice how the purple and red hydrogen emissions are dimmed in the UV image, revealing only the brightest light sources and a less uniform structure.

Immler and his colleagues observed the dwarf galaxies in the ultraviolet 160 to 330 nanometer range using the Ultraviolet/Optical Telescope (UVOT) aboard NASA’s Swift satellite, which launched in November 2004. Though Swift is known for hunting gamma-ray bursts, its UV capabilities also make it useful for other projects. By surveying galaxies in the UV, astronomers can study young stars and star-forming regions, which are brighter in this wavelength range than Sun-like stars.

The composite images reveal a less uniform galactic structure than appears in visible-light images, as shown in the animation above. Since visible-light images can’t separate the light from the galaxies’ individual stars, it is nearly impossible to isolate stellar populations and determine their distributions throughout galaxies. However, UV images provide an unobstructed view of individual young stars. The LMC image highlights the lively star formation in and around the Tarantula Nebula, home of SN 1987A, the first naked-eye supernova in modern times.

More Than A Pretty Picture 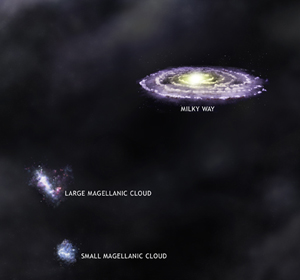 The Small and Large Magellanic Clouds are particularly interesting to astronomers because they are among the closest galaxies to us: the LMC lies about 163,000 light-years from the Sun and the SMC about 200,000 light-years. In comparison, the familiar Andromeda Galaxy is 2.5 million light-years away. Although these galaxies are small relative to the Milky Way, they are so close to us that they exceed the UVOT’s 17-square-arcminute field of view. To create a composite image for each galaxy, astronomers stitched together 2,200 snapshots of the LMC and 656 of the SMC. Both images have resolutions of 2.5 arcseconds, the equivalent of seeing a dime from a mile away.

Since the Magellanic Clouds contain so many hot, luminous young stars, they are excellent grounds to study stellar evolution. The images reveal 250,000 ultraviolet sources in the SMC and 1 million in the LMC, and already Immler and his colleagues are discovering unusual results. Preliminary analyses reveal thousands of massive stars (more than 10 times the mass of the Sun) and some highly exotic stars that they didn’t expect would emit such large amounts of UV.

The new surveys will be used to construct age maps for the galaxies, as well as to investigate how much observed light is dimmed by intervening dusty clouds in different parts of the galaxies.

The images will later be made available to interested scientists and students as part of a “legacy” project, but, for now, you can see more images in the NASA press release. Below, you’ll also find a video narrated by Immler describing what the images reveal.