The Subaru Telescope has donned a new pair of glasses called Raven, a multi-object adaptive optics system that enables astronomers to correct for atmospheric turbulence over an unprecedented field of view.

Adaptive optics has often been described at the poor man’s Hubble telescope. Instead of launching into space to avoid the blurring effects of Earth’s atmosphere, AO-equipped telescopes combat the blur by continuously monitoring the atmosphere’s ever-changing turbulence and then deforming their mirrors to compensate. These adaptations dramatically improve the resolution of the final image.

Yet, AO systems' overall utility has been hampered by some technical challenges. Those limitations are quickly being overcome as astronomers develop the next generation of high resolution imaging systems, with an eye towards the largest telescopes ever constructed.

Adaptive optics, or AO, technology has been around for a couple of decades now. AO images have helped astronomers track stars zipping around our galaxy’s central black hole, capture planets in the process of forming, and spy on our nearest galactic neighbors. Recently, the MagAO camera was installed on the Clay Telescope at the Magellan Observatories in Chile and produced images of higher resolution than those from the Hubble Space Telescope. The accessibility benefits of ground-based AO vs. space-based scopes are clear as well: if your AO system breaks, you don’t need to go to orbit to fix it.

Despite its advantages, the overall utility of AO has been limited. Most notably, AO images are generally quite small, usually only a few tens of arcseconds on a side. While this size is suitable for some astronomical inquiries — such as tracking stars in the Milky Way’s core — it curtails studies of larger objects, such as galaxies and open clusters. It also limits the overall efficiency of observing: it takes time to stitch together a bunch of tiny images. Furthermore, the next generation of large telescopes, such as the Giant Magellan Telescope and Thirty Meter Telescope, will have large multiple mirrors with large fields of view, which require the ability to produce AO corrections over a wide field of view. Until recently, AO corrections on this scale were not feasible.

To address this problem, astronomers developed Multi-Object AO systems, or MOAO for short. The first MOAO-enabled image was obtained in 2010 on the 4.2-meter William Herschel Telescope in the Canary Islands. The system was a successful technical demonstration of the concept, but it wasn’t meant to do astronomical science, says David Andersen (National Research Council, Herzberg, Canada).

Recently, a team of astronomers led by Andersen, Colin Bradley, and Olivier Lardiere (the latter two both of University of Victoria, Canada) installed a MOAO system called Raven on the 8-meter Subaru Telescope on Mauna Kea. This system will function as a test bed for the development of MOAO systems on even larger telescopes. Astronomers at the Adaptive Optics Lab of the University of Victoria led Raven’s development, in partnership with the National Astronomical Observatory of Japan (NAOJ), NRC Herzberg, and Tohoku University.

Raven has some unique abilities. It uses measurements from multiple guide stars, which are stars monitored to detect changes in the atmosphere so that the system can provide AO corrections in response. Raven has three sensors for tracking natural guide stars over a 3.5-arcminute field, each on a motorized “pick-off” arm; it also has a fourth that’s designed to work with the telescope’s laser guide star. These state-of-the-art correction abilities enable the system to compensate for atmospheric turbulence using any stars in the field brighter than magnitude 14.

Raven also has two motorized pick-off arms for observing targets, each with a field of view of 4 arcseconds. These can also be pointed anywhere in the 3.5-arcminute field. Raven’s deformable mirrors then sharpen the light from these two targets simultaneously and send the corrected images on through — in this case, to the telescope’s spectrograph, enabling astronomers to take high-resolution spectra of two targets at the same time.

Raven’s MOAO system delivers images with roughly 0.15-arcsecond resolution — better than the typical 0.5-arcsecond achievable without AO, but not diffraction-limited. The resolution is a little worse than the 0.05-arcsecond resolution of Keck, which observes in near-infrared as Subaru does and is often the gold standard for AO results. However, the new system's designers chose to create something that would work with Subaru's existing spectrograph, not produce the highest-resolution images possible. Raven successfully concentrated 30% of a star’s incoming light into a 150-milliarcsecond-wide spectrograph slit, which is what the team was hoping to achieve.

This technology is absolutely critical for the next generation of large (> 20-meter) class telescopes to function at their best. Raven is merely a technology demonstrator; full-fledged MOAO instruments dedicated for long-term science investigation might have on the order of eight laser guide star sensors and 20 science pick-off arms, Andersen says. Although the improved vision is only good for the targets caught in the science arms’ fields of view, astronomers don’t really need to see the “black space” between targets with such acuity. Fortunately, Raven and others will pave the way, and they will ensure that when the new ground-based telescopes come online, they will be peering into space with the sharpest vision available.

Plan your own observing with Sky & Telescope's 2015 Observing Wall Calendar.

Three New Findings About the Moon 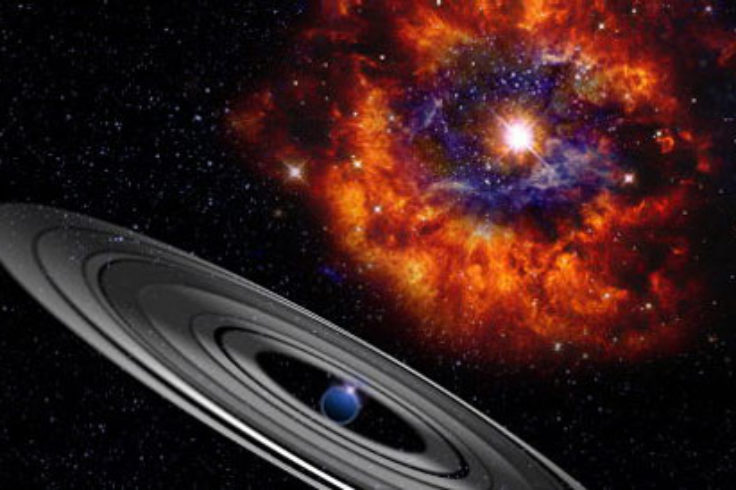