International Dark Sky Week has a dark-sky theme (and activities!) for every day this week. Celebrate dark skies and get involved with today's theme: Environmental Harms of Light Pollution.

Any of you who've lived in a smoggy city know that the ugly haze overhead is its worst in late afternoon and relatively tolerable in early morning. One reason, of course, is that far fewer exhaust-spewing vehicles are on the roads at night. 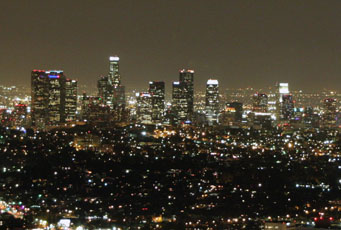 The dazzling nighttime skyline of Los Angeles, as seen from Griffith Observatory.

Atmospheric chemists also realize that each night the nitrate radical (NO3), a compound destroyed by sunlight, builds up in the darkened sky. As city dwellers sleep, it neutralizes some of the nitrogen oxides (NOx) that foul the daytime air and lead to wheeze-inducing levels of ozone (O3).

But new research shows that this nightly cleansing action isn't as effective as it could be — because nitrate radicals are being destroyed by light beamed into the sky by outdoor lighting on the ground. That's the unsettling revelation announced Monday at a meeting of the American Geophysical Union.

Several months ago Harald Stark of the NOAA's Earth System Research Laboratory conducted a series of aircraft sorties over Los Angeles to measure the intensity of light pollution at altitude. He found that the urban glow is up to 25 times stronger than the full Moon's light, and he unambiguously identified the spectral emissions of high-pressure-sodium (HPS) and metal-halide (MH) fixtures — the most common types used in street and parking-lot lighting.

Remarkably, measurements of the glow's intensity remained almost constant to altitudes of 2 miles (3 km), because so much light pollution travels at shallow angles through the atmosphere, not straight up. 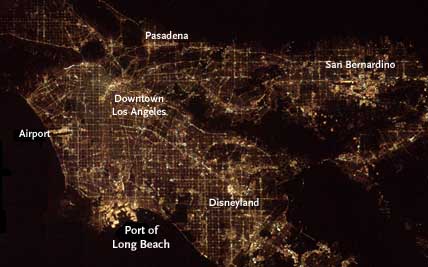 Greater Los Angeles at night, as photographed from the International Space Station on March 10, 2003.

"My original goal was simply to quantify the intensity of city lights," Stark explains. However, he adds, after the
first measurements, it became clear that that the urban glow was affecting nighttime atmospheric chemistry.

When Stark and his team plugged all of this artificial illumination into photochemical models, they found that the city lights were destroying up to 7% of the nitrate radicals that would normally be present in the nighttime atmosphere. This draw-down in turn results in NOx levels some 5% higher than they'd otherwise be, making more of these gases available for smog- and ozone-producing reactions each morning. "Ozone production during daytime could be increased by nighttime light sources," Stark concludes.

Of course, Los Angeles is just one of hundreds of vast "light islands" visible from space around the globe — and while LA might be synonymous with smog, it's hardly the worst light polluter. (For example, the light streaming upward from Las Vegas is five times more intense.) To that end, Stark and his team can use the wasted light recorded by satellites can be used to estimate the degree to which it's disrupting atmospheric chemistry over a given city. 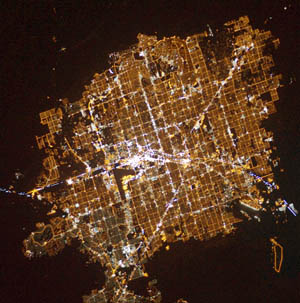 It's no surprise, but Las Vegas is alarmingly bright as seen from orbit at night. This Space Station image was taken November 30, 2010. Click here for a larger image.

"Many cities are close to their limits of allowable ozone levels," explains Bob Parks, executive director of the International Dark-Sky Association, "so this news is expected to have big implications for outdoor-lighting practices and should be of special interest to the Environmental Protection Agency."

Two years ago the EPA was petitioned to assess light pollution's role in atmospheric discoloration of the night sky under the Clean Air Act, but so far the agency's officials have made no formal response. But this new scientific result will certainly get their attention. As Parks notes, "There's nothing like another federal agency validating a position to increase your credibility."

Crime costs in fowl air too. More lights are needed in high crime areas, and as a crime preventer is costing us in both electricity (the generation of which pollutes as well) and now N03 is being eliminated, and N03 fights pollution and asthma causing 03, Ozone. Fitchburg, MA is fighting the trend, Our mayor has turned off every street light that's not on a corner or intersection (not to fight pollution, but because the city's in debt by $5,000,000 (i.e. we're broke)). Oh well. Pete

I don't celebrate Christmas or put Christmas lights around the house and yard, Tia, so I'm doing my part (hehe). Pete

Pete -- The IDA press release points out that it's only the wasted light that shines up into the atmosphere that worsens smog. Shielded lights that only shine downward are the best way to go for every reason: decreasing light pollution, saving energy and money, and now it seems improving air quality. As Fitchburg replaces its outside lighting fixtures, I hope you will encourage your planners to use shielded, energy efficient, full spectrum LED's. IDA has a wealth of resources for all kinds of lighting applications, from households up to cities and highways. Every skywatcher should support IDA. http://www.darksky.org

Checking Mount Wilson's TowerCam at night is scary: so many bright point-sources (suggesting the bulb is visible above horizontal). Perhaps there should be a smog-reducing rule: if you can see your light on the TowerCam after midnight, we will shut you down...

The EPA has about much credibility as the UN's IPCC: None! What they DO have is the iron fist of Big Government, media support, and unlimited taxpayer money to serve a radical agenda.....

I grew up in Paramus, NJ and still live here. With all of the shopping malls and being about 10 miles from New York City, the light pollution is incredible. No wonder my favorite astronomical targets are the Moon and planets!

Imagine the energy, hence money, saved if every store (parking lots included) were to turn off all lighting, including store signs when they closed for the night! Perhaps then I would be able to see the Milky Way from my house as I did some 40 years ago when I was a kid.

Could you imagine the energy and money saved if all businesses/stores were made to turn off all lighting visible to the outside, which would include store signs and the lights in parking lots, when they close for the day? Also, throw in a clause that security guards don't count for a business being open to make sure shopping malls are included in this.

In today's world, this should be a part of our Federal Laws.