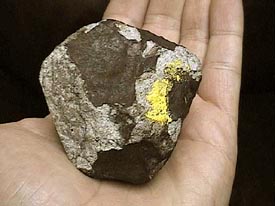 This 212-gram fragment of the Park Forest meteorite fall grazed a yellow fire hydrant as it fell to Earth.

News outlets reported last week that a meteorite struck a mountainside in Norway, releasing as much energy as the Hiroshima atomic bomb. Now researchers are reporting the first data from the blast, which shows that the event was much more tame.

On June 7th, residents of Troms County, Norway, reported that they saw a large ball of fire in the sky at about 2:05 a.m., local time. Based on early reports, Knut Jørgen Røed Ødegaard (Institute of Theoretical Astrophysics, Norway) estimated that the energy of the event was comparable to the Hiroshima bomb; however this was quickly disputed.

“A Hiroshima-sized blast usually corresponds to a projectile that explodes tens of kilometers high, coming nowhere near the ground,” says David Morrison (NASA Ames Research Center). “I am skeptical that this was anything more than a very bright fireball.”

Wayne Edwards and Peter Brown, both of the Western Meteor Physics Group at the University of Western Ontario in Canada, report that their group detected the airwaves from the meteorite at stations in Germany and Kazakhstan. Using both airwave and seismic data, Edwards has calculated that the impact released between 0.1 and 0.5 kilotons of energy — about 1/100th as much as the Hiroshima blast.

“That’s still substantial,” says Brown. “It’s unusual that it would impact someplace where there’s a population of any sort.”

“You’ll probably get individual fragments making it to the ground,” says Brown. “But the area there is very rugged, mostly bush and tundra, so the prospects of meteorite recovery are very low.”

Based on the seismic and airwave data, Edwards and Brown calculate that the meteorite landed somewhere around 69.1 - 69.5N and 22.2 – 24.2E; however, no material has yet been reported.

Meteorite impacts of this magnitude occur about a dozen times every year, but most strike unpopulated areas. On March 26th, 2003, a similarly energetic meteorite exploded over Park Forest, Illinois, scattering large pieces over the suburbs of Chicago. Researchers estimate that the Park Forest meteorite was anywhere from 900 to 14,000 kg and about 2 meters (6.5 feet) across; however they only recovered about 30 kg of material.