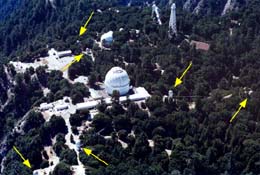 Nestled among the historic domes on California's Mount Wilson are the six 1-meter telescopes constituting the CHARA Array. Next year, when light from all six telescopes is combined to form interference patterns, CHARA will resolve targets with milliarcsecond resolution — a 500-fold improvement on conventional ground-based telescopes.

Last week, astronomers achieved an esoteric but significant
milestone in the quest to see more and more detail on cosmic objects.
Scientists with the Center
for High Angular Resolution Astronomy (CHARA) combined starlight
from two telescopes atop historic Mount
Wilson and created a stable "image" with those beams. This has been
done many times before on Mount Wilson and elsewhere. This time, however,
the two telescopes were separated by 330 meters, the longest baseline
used to date at optical wavelengths, says CHARA director and Georgia
State University professor Harold A. McAlister. They are part of the
six-telescope CHARA Array, slated to begin routine operations next year.

A basic tenet of optics is that a telescope's angular
resolution — the size of the smallest details it can show —
is inversely proportional to the diameter of its light-gathering lens
or mirror. Optical interferometers like the CHARA Array are designed
to yield the angular resolution of a single mirror or lens hundreds
of meters across. They do this by pointing two or more telescopes at
a single target, then mixing the light beams thus gathered. The beams
interfere with one another, creating fringes that can be analyzed to
produce an image of the target (or at least to measure some of its properties).
Several optical interferometers operate worldwide, but the CHARA Array's
large mirrors and separations (and Mount Wilson's famed atmospheric
stability) make it "uniquely suited" to measuring the fundamental properties
— masses, diameters, and surface temperatures — of numerous
stars, says McAlister.

While the CHARA array can't take "pictures" of extrasolar
planets, it will be able to detect the wobbles that such planets induce
on stars within binary systems. It also will measure the cyclical swelling
and shrinking of pulsating variable stars and resolve disks and jets
associated with young stellar objects, says McAlister. The array will
work at visual and near-infrared wavelengths and will obtain spectra
as well as images of individual stars in many previously unresolved
binaries.