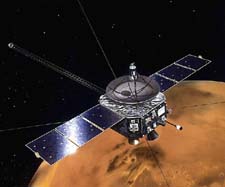 The Nozomi spacecraft, launched in mid-1998, has been plagued by difficulties. But Japanese space officials are hopeful that the craft will survive its roundabout trip to Mars and function normally once it arrives there in December 2003.

Japan's first-ever planetary spacecraft, Nozomi, quietly slipped past Earth yesterday at a distance of about 16,000 kilometers. Although the flyby wasn't particularly close, it gave the spacecraft the velocity boost and redirection it needed to coast outward toward Mars. Nozomi should reach the red planet in mid-December — more than four years later than originally planned.

The mission got off to a good start when launched on July 4, 1998, but 5½ months later a thruster malfunctioned during the powered flyby of Earth that should have delivered Nozomi to Mars in October 1999. To compensate for the velocity shortfall, dynamicists fashioned a 4½-year-long trajectory that called for two more flybys of Earth, one last December 21st and the second on June 19th.

Nozomi means "hope" in Japanese, and mission officials are counting on hope and a little luck to recover the spacecraft from the serious challenges it still faces. Beyond its rocket woes, the spacecraft was dealt another serious blow in April 2002, when a powerful outburst of solar radiation damaged the communciations system and the power-generating module for its heating system. Soon the onboard supply of hydrazine fuel froze and left the spacecraft unable to maneuver.

Fortunately, the roundabout trajectory eventually brought Nozomi close enough to the Sun for some of the hydrazine to melt, allowing the craft to make some crucial course corrections. Another trajectory tweak is scheduled for June 27th. Engineers will mount a final effort to solve the power problems next month — if the fuel freezes again en route to Mars, Nozomi's rocket engine will be unable to slow the craft and allow it to slip into Martian orbit.

Nozomi is an ambitious mission that will focus primarily on the red planet's upper atmosphere and electromagnetic properties. It carries 14 instruments, including a color camera.