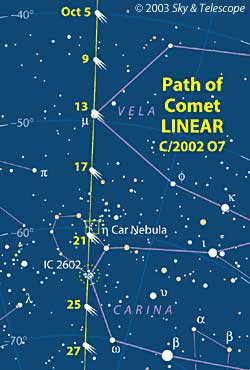 Comet C/2002 O7 should be 10th or 9th magnitude during October and November and readily seen with a small telescope. Here is a small excerpt from a chart that covers the period September 23 to November 16, 2003. The full chart is available as a black-on-white PDF (1.1 megabytes) suitable for printing. (You'll need a free copy of Adobe Reader to open and print the chart, which shows stars as faint as magnitude 6.5.) Comet icons mark 0h Universal Time on the dates indicated.

Although not expected to become bright, a first-time visitor discovered more than a year ago is set to traverse the far-southern sky.

Comet C/2002 O7 was discovered on July 29, 2002,by the Lincoln Laboratory Near-Earth Asteroid Research (LINEAR) survey program using its automated 1-meter telescopes in Socorro, New Mexico. Like many of the comets named after LINEAR, the 20th-magnitude object was thought to be an asteroid until images taken a few days later with other telescopes revealed its cometary nature.

In early September this Comet LINEAR will be temporarily hidden from view, hugging the glare of both evening and morning twilight as it passes 23° south of the Sun. Later in September it will emerge in the Southern Hemisphere’s pre-dawn sky, moving south through Hydra and Antlia. Around the time of perihelion (its point closest to the Sun) — September 22nd at 0.90 astronomical unit from the Sun (and 1.56 a.u. from Earth) — Comet LINEAR might be 10th magnitude.

After perihelion its distance from Earth decreases until early November, enough that we can expect the comet to brighten slightly, perhaps by a magnitude.

On October 13th LINEAR passes within a few arcminutes of 3rd-magnitude Mu (m) Velorum, though observers that morning must contend with a gibbous Moon. A week later the comet goes across the Eta (h) Carinae Nebula. Moving at more than 1° per day, LINEAR will pass just east of the 5th-magnitude star Eta Carinae itself. Three days later, the comet will cross the face of the naked-eye star cluster IC 2602 in Carina.

Then Comet LINEAR quickly races into Octans, where we can witness one of the rarer moments in comet observing. On November 5th, little more than 1° will separate the comet and the south celestial pole. A bright Moon, then four days past first quarter, will hamper observations, but the 9th-magnitude comet will remain within 10° of the south celestial pole for 10 days.

Having reached its southernmost point, this comet then heads north. Moving from Octans into Indus, it passes a handspan from the bright globular cluster 47 Tucanae and the Small Magellanic Cloud before climbing into Tucana itself. It enters Grus by late November, fading from 10th to 11th magnitude.