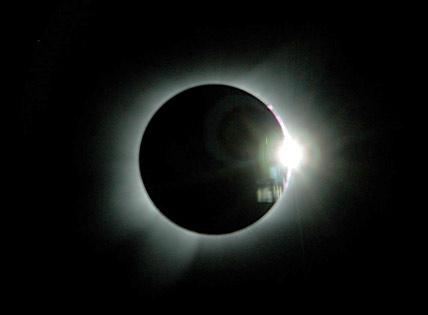 The onset of totality is marked by the 'diamond ring' effect as the Moon has covered the entire face of the Sun except for a lone bead of sunlight shining through a deep valley on the lunar limb. The solar corona, a softly glowing, million-degree plasma, is just coming into view around the Moon's silhouette. Note the bright prominence at upper right, a finger of hot gas glowing in the red light of the hydrogen atom. Sky & Telescope senior editor Dennis di Cicco shot this photo through the window of a chartered LanChile Airbus A340 jetliner just after 11 p.m. GMT on November 23, 2003, over Antarctica. The subsequent total eclipse lasted 2 minutes 22 seconds and ended with a diamond ring at the opposite limb as the Moon began to uncover the Sun.

On Sunday November 23, 2003, between 5:24 and 6:14 p.m. Eastern Standard Time, a total eclipse of the Sun was visible from a narrow track across Antarctica. To see the event, Sky & Telescope magazine and TravelQuest International chartered a LanChile Airbus A340 passenger jet to intercept the eclipse at 6:06 p.m. EST at an altitude of 38,000 feet. The 74 passengers and crew members aboard experienced 2 minutes 22 seconds of totality — 29 seconds more than is possible from the ground — with the Sun positioned 12° above the horizon and visible directly off the aircraft's port (left) wing. 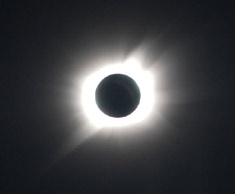 With the Moon completely blocking the Sun's visible face, the pearly white corona — our star's ultrahot outer atmosphere — bursts forth in all its glory. This photo of totality over Antarctica is a 1/60-second exposure with a Nikon digital camera and 200-millimeter lens. It was shot through a window of the LanChile Airbus A340 aircraft chartered by Sky & Telescope and TravelQuest International by tour participant William Whiddon of California.

" Early Monday morning we received the first reports from the crew onboard the flight. The following are excerpts from an e-mail from expedition leader J. Kelly Beatty, executive editor of Sky & Telescope magazine:

"No prominences to speak of, but there was a dramatic long coronal streamer at the 8 o'clock position. Corona easily visible before 2nd contact. Eclipse veterans on board said it was the best ever. Shadow approach (from behind the plane, left as we looked out) and recession was dramatic. Corona dazzling and high contrast at high altitude....

"After totality we made two low-altitude sweeps over the South Pole at about 2,500 feet. Saw a Hercules taking off during our approach — very dramatic. We know people were out looking at us because we resolve them in our pictures. 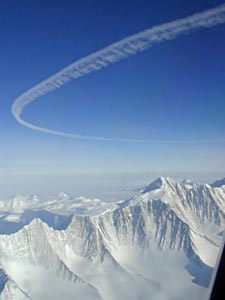 Vinson Massif, the tallest mountain in Antarctica, as seen from the window of the LanChile Airbus A340 passenger jet chartered by Sky & Telescope and TravelQuest International to see the total solar eclipse of November 23, 2003. At its highest, Vinson reaches 4,897 meters (16,067 feet).

"We also made an incredibly dramatic circle around Vinson Massif, Antarctica's highest peak. The photo shows the contrail of our jet as we corkscrewed down to a lower altitude for a closer look.

"We have a lot of very happy people this morning!"

For those not fortunate enough to be on a flight or stationed in Antarctica, a partial eclipse was visible over a broader area, including the tip of South America and parts of Australia and New Zealand.

Ethan Dicks, a scientist at the Amundsen-Scott South Pole Station with the AMANDA project (Antarctic Muon and Neutrino Detector) was one of many South Pole scientists who watched the partial phases of the eclipse. Skies were clear and everyone had a fine but chilly view. After the eclipse, scientists at the pole had another rare view — this time of the LanChile airbus as it "buzzed" the station at 2,500 feet.

This composite image, taken at the Amundsen-Scott South Pole Station by Ethan Dicks, shows the Moon gradually covering the Sun during the November 23rd solar eclipse. The final image in the sequence shows about 85 percent of the Sun's face hidden by the Moon — almost maximum eclipse for those hardy souls observing from the 'bottom' of the world.

Another aircraft — this one a Qantas Boeing 747-400 — also flew the eclipse. Chartered by Croydon Travel, the 14-hour flight was the longest Australian commercial "domestic" flight on record according to Peter Ward, the flight's pilot who also happens to be an avid amateur astronomer. He notes that the aircraft's motion relative to the eclipse gave everyone on board an extra 15 seconds of totality compared to what would have been seen on the ground. 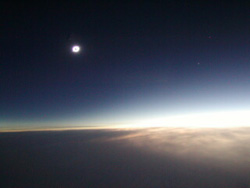 On board a Qantas Boeing 747-400 aircraft, Lynn Palmer captured this wide-angle view of totality over Antarctica during the November 23rd solar eclipse. The Moon's shadow is clearly visible on the clouds below the eclipsed Sun; the region on the right side of the image is bright because it's outside the path of totality.

Sky & Telescope contributing editor Alan Dyer was also on the Qantas flight. He writes that "The sky was absolutely pristine, as you can imagine, from 33,000 feet. The naked-eye corona extended out for two or three solar radii with lots of long streamers evident; Venus and Mrcury were easy to see.

"However, the hallmark of this eclipse, besides the amazing streamers, was both diamond rings. Both coming in and especially going out, the diamond rings were intense, prolonged, and like arc lamps for a few seconds. They were the best diamond rings I have seen. The third-contact ring was especially prolonged and made everyone shout with excitement for its entire duration." 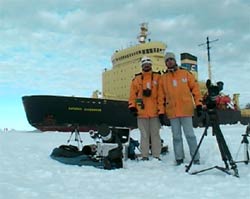 The Russian icebreaker Kapitan Khlebnikov carried eclipse enthusiasts to the edge of Antarctica in search of totality. Babak A. Tafreshi (right), an editor with the Iranian astronomy magazine Nojum, and Hamid J. Khodashenas begin to set up for the eclipse on the icepack at the western edge of the Davis Sea.

But not all the action was in the air. The Russian icebreaker Kapitan Khlebnikov carried some 100 eclipse enthusiasts to the edge of Antarctica for a look at totality. Poor weather caused them to shift their observing location 80 miles west of the centerline to the western edge of the Davis Sea. According to Babak Tafreshi, an editor with the Iranian astronomy magazine Nojum, they were surrounded by glaciers while watching the eclipse from the pack ice. Despite sometimes-heavy cloud cover, they managed to observe all four contacts, Baily's Beads, and had glimpses of the corona through the clouds during totality (which lasted 1 minute 14 seconds at their location). 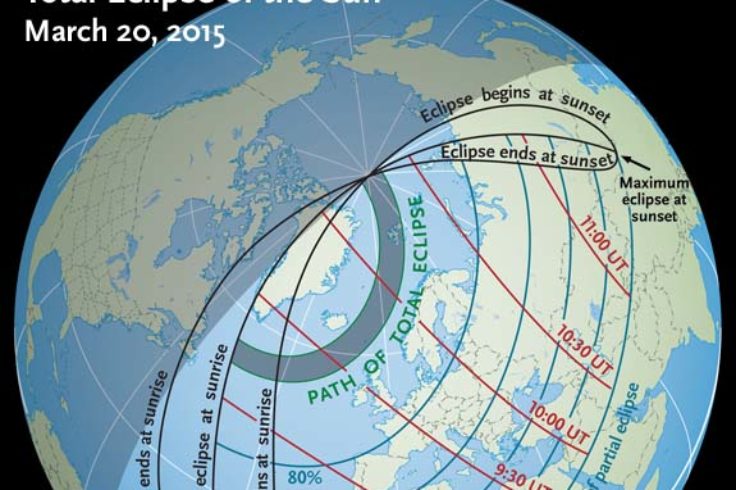 A "Whodunit" in the Asteroid Belt 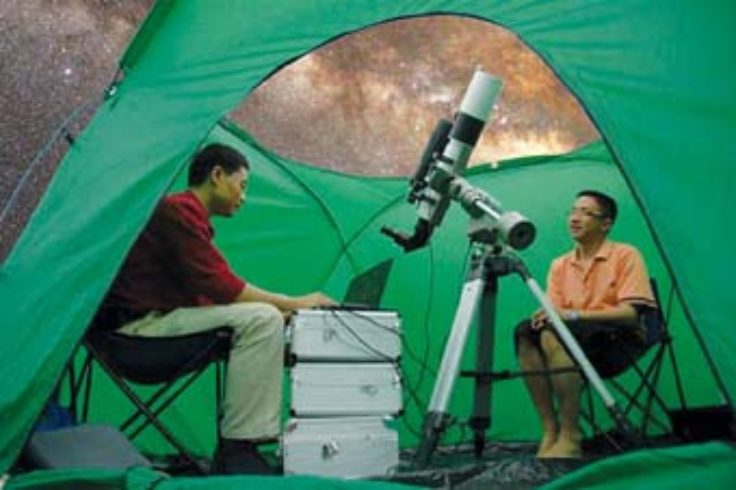