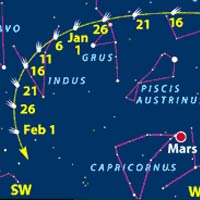 Southern Hemisphere skywatchers now have the best view of the comet, when it should be visible as a faint, fuzzy 'star' to the unaided eye. This chart shous a worthwest-facing view of the sky from latitude 35° south, at 8 p.m. in early January. Click on the image to see the complete chart.

On December 16, 2000, the Lincoln Laboratory Near-Earth Asteroid Research team’s automated 1-meter reflector in New Mexico swept up an apparent asteroid in Cassiopeia (among hundreds of solar-system objects it detected that night). Although only magnitude 18 at the time, the object’s unusual motion caught the attention of astronomers at the Minor Planet Center in Cambridge, Massachusetts. After receiving positions for a few more nights, they managed to link the object with a separate set of LINEAR observations dating from mid-November. But it was not until Timothy B. Spahr (Smithsonian Astrophysical Observatory) imaged the object with the 1.2-meter reflector on Mount Hopkins, Arizona, that its true nature became apparent. His image revealed a tiny, 10" coma and, even more telling, a short, broad tail pointing to the northeast. The newcomer was obviously a comet.

Brian G. Marsden’s orbit calculation indicated that on January 22, 2002, Comet LINEAR, C/2000 WM1, would pass just 0.55 astronomical unit (82 million kilometers) from our star. As it begins to draw away from Earth, we might expect the comet to fade. But the effect is almost perfectly offset by its brightening as it approaches the Sun. The net result is that from early in December until the first days of February the magnitude should remain close to 5. All the while, the comet’s coma should steadily shrink in angular extent and look progressively more condensed. 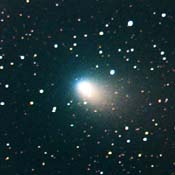 This color-composite view of Comet LINEAR (C/2000 WM1) was taken on the night of November 10-11 by Arizona astrophotographer Tim Hunter using a Meade 12-inch LX200 telescope and an Apogee AP7 CCD camera.

Throughout this interval Comet LINEAR’s elongation from the Sun in the evening sky will be diminishing. Even so, it will never become lost in the Sun’s glare. Around the date of perihelion passage, January 22nd, the gossamer little visitor to our solar neighborhood is in the constellation Indus, well south of the Sun. Southern Hemisphere observers can catch sight of it twice each night, first during evening twilight and then again toward dawn.

February finds the comet marching northward once again, but its elongation from the Sun is slow to increase, so that it hovers near the dawn’s glow. Now in a rapid retreat from the Sun, Comet LINEAR will quickly become a binocular object and then a purely telescopic one. It also slowly returns into view for midnorthern observers during the second week of March. If all plays out as I expect, the comet could well stay within reach of quite modest telescopes throughout the spring.

One week after passing perihelion, Comet LINEAR brightened dramatically from magnitude 6.2 to 2.3 — a 35-fold increase over a 3-day period. Although it’s fading again, the details are available in this News item.