The Sun let loose two powerful X-class flares earlier today, spaced about an hour apart. X-class flares are the most powerful type and can lead to widespread radio blackouts and confuse spacecraft and satellites. Today's initial blast, registering X5.4, is the second-strongest yet observed during this solar cycle. Click here to see a video of the outburst, as captured by NASA's Solar Dynamics Explorer satellite. The sequential flares triggered enormous coronal mass ejections, or CMEs, that are racing Earthward right now at 1,300 and 1,100 miles per second, respectively. Based on observations from NASA's Solar Terrestrial Relations Observatory (STEREO) and the Solar Heliospheric Observatory (SOHO), space physicists predict that these powerful pulses of hot, ionized gas ejected from the Sun will sweep over both Earth and Mars, as well as a number of interplanetary spacecraft. 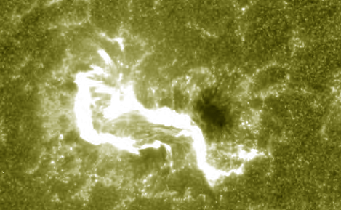 The active region 11429 (often shortened to AR1429) let off a powerful solar flare that is heading for Earth. Make sure to check your skies if you're in darkness around 6:30 Universal Time.


NASA / SDO
NASA's models suggest that the leading edge of the first CME is most likely to reach Earth around 6:30 UT on March 8th. That's 10:30 p.m. on March 7th Pacific Standard Time and 1:30 a.m. on March 8th Eastern Standard Time. (See the world clock converter for other time zones.) But it could arrive up to 7 hours earlier or later — or even miss Earth entirely.

Although Earth's magnetosphere will deflect most of the blast wave, some of it will leak in, impacting our upper atmosphere primarily poleward of 50° geomagnetic latitude, but again it’s hard to predict with certainty. NOAA’s Space Weather Prediction Center suggests auroras might be seen at latitudes "as low as Pennsylvania to Iowa to Oregon.”

The full Moon will interfere with the views, but it won't overwhelm a really bright aurora.

You can find updates at www.spaceweather.com.