Catch Comet Machholz at Its Best 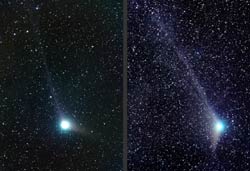 When Kazuyuki Tanaka photographed Comet Machholz (left) on December 16, 2004, the dust tail appeared about 120° clockwise from the ion tail. But 16 days later, after Earth had passed through the comet’s orbital plane, Paolo Candy’s image (right) showed the dust tail 120° counterclockwise of the ion tail.

Comet Machholz, C/2004 Q2, is entering its glory days. For observers in the Northern Hemisphere, all the circumstances are at their best in the first half of January 2005. The Moon is conveniently approaching new phase just as the comet shines at its brightest and makes its closest approach to Earth. And to add to the fun, the comet is traversing one of the best-known and best-loved areas in the night sky, passing 2° west of the Pleiades on the night of January 7th (see "Comet Machholz in the Evening Sky").

The northeastern US has been suffering from a long cloudy spell, but a brief break on the evening of January 1st allowed many Sky & Telescope editors to view the comet. Editor in chief Rick Fienberg spotted it from his home within walking distance of downtown Boston using only his eyeglasses for optical aid, but he wasn’t completely sure that he had the right target until he viewed it through binoculars.

Observing from the Boston suburbs that same night, I found Comet Machholz to be an easy naked-eye target, slightly brighter and distinctly more condensed than either the Andromeda Galaxy or the Double Cluster in Perseus. At first glance through my 7-inch reflector, the comet seemed extremely bright but nearly featureless — an almost stellar nucleus surrounded by a bright coma some 10 arcminutes across. On closer inspection, it was apparent that the coma had a fairly sharp western edge but trailed off vaguely well beyond the 5-arcminute radius in all other directions. And scanning the area with averted vision at 120x, I saw faint extensions about a half-degree long to the northeast and slightly west of south, matching the positions of the ion tail and the dust tail, respectively. 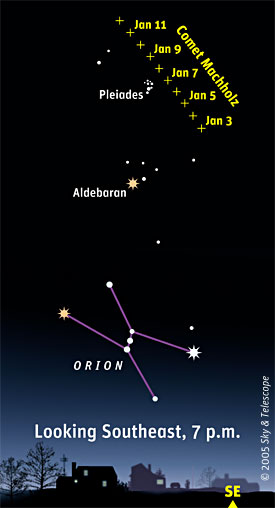 Use this handy chart to locate Comet Machholz high in the southeast after dark in early January 2005.

Observers under dark skies have reported that the dust tail is fairly easy to see, extending perhaps 2°, but the ion tail is much more elusive. To our knowledge, no visual observers have traced the ion tail to anything like the 6° length shown in photographs.

The ion tail is carried by the solar wind, so it stretches almost directly away from the Sun. The heavy particles of the dust tail, for the most part, extend along the comet’s orbital path. Earth passed through the comet's orbital plane on December 26, 2004, so we are now seeing the dust tail from “below” rather than “above.” This caused the apparent positions of the tails to flip, as shown in the photographs above. (NASA has a Java applet that simulates the orbits of Comet Machholz and the planets in three dimensions.) 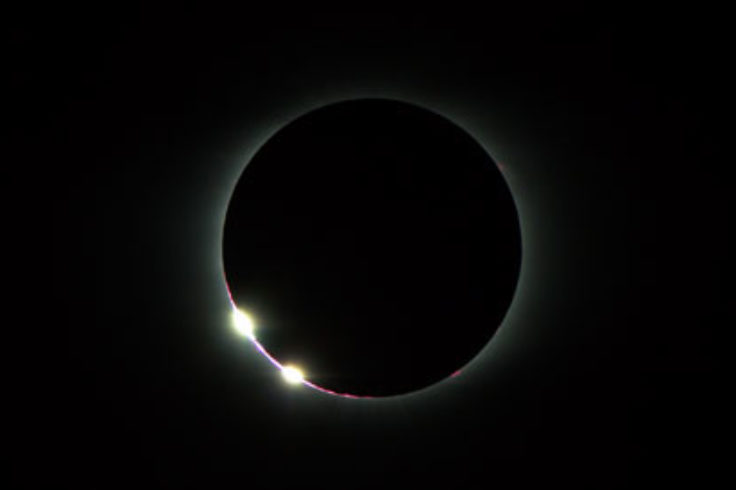 From the Frontline of Totality: Sky & Telescope Reports