Have you seen Venus yet this autumn? If not, then this evening is a great time to start. 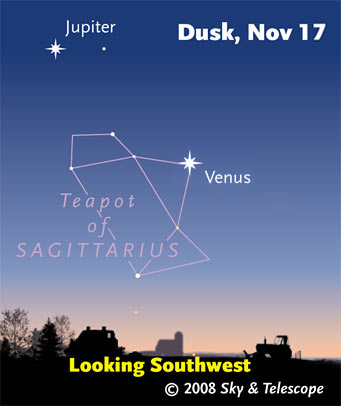 Although Venus has been visible in the evening twilight for several months now, it's been pretty low by the time the sky gets dark. But the situation has been improving rapidly since the beginning of November. By mid-month, Venus is about 15° above the southwestern horizon a half hour after sunset for people at mid-northern latitudes, making it quite easy to see. And it's still above the horizon an hour after that, when the sky is fully dark.

But the evening of Monday, November 17th, is special for observers in the America. That's when Venus passes just a few arcminutes away from Lambda Sagittarii, also known as Kaus Borealis, the star at the top of the Sagittarius "Teapot." Venus is 600 times brighter than Lambda, so the star will be hidden in the planet's glare if you try to view it without optical aid. But any telescope, or even steadily supported binoculars, should show Lambda shining off Venus's edge. If you have a telescope, note also that Venus is distinctly off-round. It's now in its gibbous phase, 74% illuminated.

Next turn your telescope to Jupiter, 13° to Venus's upper left. You'll see that Callisto, the outermost moon, is just about the same distance from Jupiter as Lambda is from Venus. (Click here for our interactive Javascript applet showing the positions of Jupiter's moons.) And Jupiter outshines its moons by just about the same margin that Venus outshines Lambda. So just this one night, you get to see Venus as it would appear if it had a moon like one of Jupiter's.

I then began to look at Jupiter and its three moons visible easily tonight. As I adjusted my deferred vision, I noticed a little momentary blink of yellowish "starlight" below and off the left side of the three eastward "left-side" moons in my binos.

I continued to look for the blink of light and saw it in at least five sessions during 1 1/2 hours until it got too low in the west. It would blink intermittently, sometimes strobing once or twice, and then sometimes not winking in for 15-30 seconds.

My weather was pretty clear and dry, So Cal Santa Ana leftovers. Did I have a faint star with atmospheric blips or did I see a pulsar? or a fixed satellite? I am a long-time subscriber, small telescope observer, solar eclipse fan, and not given to fancy.

ECB asks: "Did I have a faint star with atmospheric blips or did I see a pulsar? or a fixed satellite?"

No pulsar is bright enough to see through binoculars, and a satellite wouldn't have stayed near Jupiter for more than an hour. By process of elimination, I conclude that you saw a star, though I can't identify which one for sure. The flickering that you saw sounds very much like the scintillation that a star exhibits when it's low in the sky. Up high, it's called twinkling. The lower the star gets, the longer and stronger the pulsations become.

Although the weather is hazier. Thank you for taking the time to respond to my inquiry. We so often think we're seeing something unique or unusual as we're observing; wasn't it enough that I saw: 1) Venus with lambda Sag looking like a moon, 2) Jupiter with all the moons and my winking star, and 3) a satellite or Space Shuttle looking as bright as Venus off the side of Jupiter. All on the same evening of viewing. What a beautiful vantage point we have if we take the time to look. Thanks again.

i am a new subscriber to this site. when looking at 'this weeks sky at a glance', (21st November) as compared to the sky outside it seemed to be the wrong way round, with Jupiter being above Venus toward the right rather than the left, as shown. does the fact that i live in Fiji have anything to do with it?

It sure does, Daniel. Our charts are drawn for latitude 40° north. To simulate the view from Fiji, which lies at 18° south, you'd have to rotate the whole scene by 58° clockwise. — Kelly Beatty

thanks kelly that explains everything. i will keep looking out and now i know what I'm seeing! 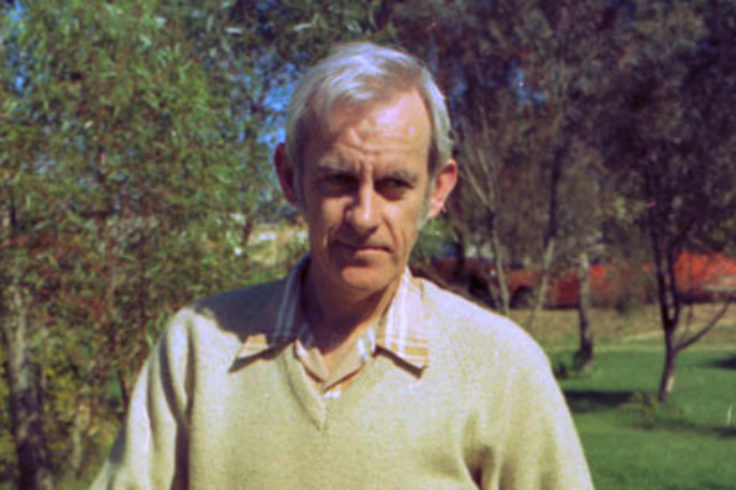