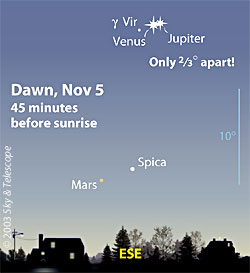 The planet Venus makes several dramatic appearances in 2004, as it pairs with the crescent Moon in February and March; crosses the Sun's disk in June; and forms a dramatic 'double star' with Jupiter before dawn on November 5th.

Every clear night the starry realm offers skygazers new sights to behold and old favorites to revisit — there’s always plenty to see in the heavens on a regular basis. Planets are popular targets for skywatchers, and during the first half of 2004 three of them dominate the evening sky. Brilliant Venus and fainter Saturn are well-placed for viewing after sunset during the first few months of the new year while Jupiter remains a fine sight until it's lost in the Sun's glare in late August. Mars and Mercury pass within 0.2° of each other at dusk on July 10th, and on November 5th Venus and Jupiter make a dazzling pair in the dawn sky. But each year uncommon events and sights arise that merit special mention, and there are several in 2004. Leading the list is something that hasn’t occurred in 122 years. 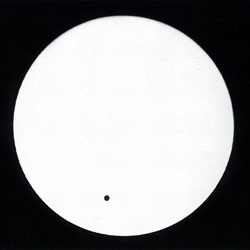 Students at Vassar College, New York, acquired this image of the transit of Venus on December 6, 1882. Small specks on the Sun's face are photographic flaws, not sunspots.

No one alive today has seen this sight, and it happens only twice this century. For the first time since 1882, Venus will glide across (transit) the face of the Sun on June 8th, taking 6 hours 12 minutes to complete its journey. The entire transit is visible from Europe, Africa (except the far west), the Middle East, and Asia (except the far east). For observers in eastern and central North America, the Sun rises with the transit in progress. The article "The Transit of Venus:
Where to See It" will help you determine whether or not you'll be able to see this event from your area.

A magnified view of the Sun (which requires a proper solar filter) will reveal the black dot of Venus slowly moving across the Sun’s face from celestial east to west. Perhaps the most interesting aspect of the transit is watching Venus enter and exit the solar disk — a process that takes about 20 minutes.

Eye safety is a prime consideration when you’re viewing the solar surface (with or without Venus in transit). Always use a safe solar filer or an indirect projection technique, even when the Sun is low on the horizon. Visit "The Sun" section of Sky & Telescope's Web site to learn how to safely view our star. 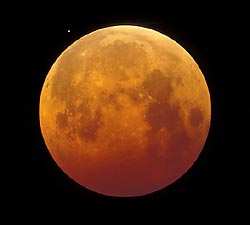 On September 26–27, 1996, Sky & Telescope senior editor Dennis di Cicco captured this image of a total lunar eclipse. To the upper left of the Moon is a 7th-magnitude star in Pisces.

There are four eclipses during 2004: a pair of total lunar eclipses and two partial solar eclipses. First up is a partial eclipse of the Sun, visible on April 19th to observers in Madagascar and the southern third of Africa.

Two weeks later, on the night of May 4–5, a total lunar eclipse is visible from Europe, Asia, Africa, and Australia. Totality lasts for 76 minutes, with mideclipse occurring at 20:30 Universal Time (10:30 p.m. in Cape Town, South Africa). At least some part of Earth's dark shadow (the umbra) touches the Moon for 3 hours 24 minutes. Western Europe, western Africa, and eastern South America will see the Moon rise already eclipsed, while in eastern Asia and Australia the Moon sets as the eclipse ends.

A partial solar eclipse occurs in western Alaska at sunset on October 13th and across Japan, the northeastern tip of China, and eastern Russia on the 14th. Greatest eclipse occurs in Alaska, west of Anchorage, where more than 90 percent of the solar diameter is obscured as the Sun sets.

The second total lunar eclipse of 2004 is visible from the Americas, Europe, most of Africa, and western Asia on the night of October 27–28. Canada and the continental US will see all of totality (weather permitting), but Hawaii will experience only a partial eclipse, as the Moon rises after totality has ended. At 9:14 p.m. Eastern Daylight Time on the 27th (subtract 3 hours for Pacific Time, add 4 hours for Greenwich or Universal time) the Earth’s umbra touches the left side of the Moon. The dark notch grows until it covers the entire lunar surface at 10:23 p.m. Since the envelope of air surrounding our planet bends some of the Sun’s light into the Earth’s shadow, the Moon will probably remain visible during totality. If our atmosphere is relatively clear, the Moon will be bathed in the reddish glow from sunrises and sunsets around the world. But if the air is thick with clouds, the Moon may look dull gray and dim. Totality ends at 11:45 p.m., and the Moon departs the Earth’s umbra at 12:54 a.m.

Additional details about these and other upcoming eclipses, as well as information about how to observe and photograph these breathtaking celestial spectacles, are available in the "Eclipses" section of this Web site. 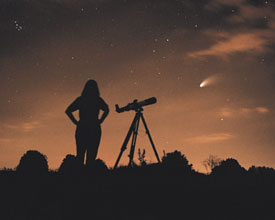 A pair of comets show much promise for 2004, though keep in mind that predicting the brightness of comets remains a somewhat unreliable science.

When a bright comet appears in Earth’s skies, it’s usually a surprise. Rarely do astronomers have enough warning of a comet’s arrival to be able to issue predictions about its brightness and position a year or more in advance. The downside of such long-range prognostications is that comets are notoriously unreliable! However, at least two moderately bright comets will appear in 2004. It’s possible both will be visible without optical aid, and skywatchers south of the equator will see both comets at their best.

Comet C/2002 T7 (LINEAR), discovered in October 2002, remains faint until after perihelion (its closest approach to the Sun) in late April 2004. By mid-May, Comet LINEAR may become at least as bright as 4th or 3rd magnitude, and Southern Hemisphere observers will be able to see it in the southwest shortly after sunset. At this time it’ll join another comet — Comet C/2001 Q4 (NEAT) — that southern skywatchers will have been observing for some time.

Comet NEAT was discovered in August 2001, but it’s visible mainly from south of the equator until late April 2004. Then the comet begins a rapid rise through the winter sky, moving past the bright stars Sirius and Procyon in early May and M44 (the Beehive Cluster in Cancer) at midmonth before entering the constellation Ursa Major in late May. During this time, C/2001/Q4 may become at least a 3rd-magnitude object, making it easy to spot after twilight in the west.

More information about both comets is available in the online article "Two Comets in 2004."

Occultations of Jupiter and Venus 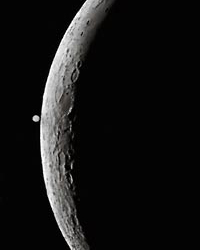 The waning crescent Moon is about to occult Jupiter on the morning of Oct. 19, 1968. John Asztalos used a 12-inch reflector to take this picture moments before the bright lunar limb touched the planet.

As the Moon glides eastward through the sky, it occasionally occults (passes in front of) a star or planet, snuffing out its light. The star or planet reappears on the Moon’s opposite side up to an hour later.

Beginning about 3:45 a.m. Eastern Standard Time on the morning of December 7th, the Moon occults Jupiter for observers from the Rocky Mountains eastward in North America. This will be a spectacular event, easily visible in binoculars and small telescopes. The giant planet and several of its four bright satellites will disappear behind the bright lunar limb of the waning crescent Moon, reappearing from behind the dark limb up to an hour later.

Three other planetary occultations in 2004 deserve mention, though all are daytime events. On May 21st, Europeans see the Moon hide Venus beginning around 11:00 Universal Time. For skywatchers in northeastern US and eastern Canada, the Moon covers Jupiter beginning about 12:00 p.m. EST on November 9th. Finally, on November 10th, observers in Australia and New Zealand see an occultation of Venus starting at approximately 1:00 UT (noon in Sydney, Australia).

The Moon also hides bright stars on a regular basis. The best of these occultations for the coming year are described in the article "Lunar Occultation Highlights for 2004."

Detailed descriptions of upcoming celestial events appear monthly in Sky & Telescope magazine. A summary of these events, plus any late-breaking observing stories, can be found in the Observing section of this Web site.