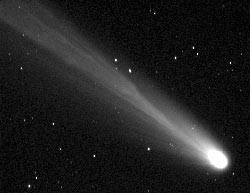 Click on the image of Comet Ikeya-Zhang to see an animated gif that reveals motion in the comet's tail. Michael Karrer acquired this 10-image sequence on March 11th using a 4-inch f/8 Takahashi refractor and a StarlightXpress MX916 CCD camera; each exposure was 3 minutes long. The image is about ½° wide.

Once Comet Ikeya-Zhang (C/2002 C1) passed the Earth at a distance of 60 million km (38 million miles) on April 30th, it was clear that the comet's brightness had peaked near 3rd magnitude earlier that month. For instance, on April 5th skywatchers were reporting that it was about magnitude 3.4 — a lovely, fuzzy "star" glowing blue-green with a tail several degrees long.

But by late April, the comet had definitely faded; observers reported that its tail shrank and its magnitude dropped to between 4.5 and 5.0. For most skywatchers, particularly those not blessed with a dark sky, Ikeya-Zhang had become a binocular (or telescopic) object.

Currently it's heading south, passing through Serpens Caput (see the ephemeris at the end of this article). As of early June the comet was hanging in between 7th and 8th magnitude. It appears as a fuzzy condensation — no tail is visible. Nevertheless, it remains easy to see in small telescopes.

The path of Comet Ikeya-Zhang during May and June. The chart shows its location at 0 hours Universal Time on selected dates. Click on the image for a larger view of the chart.

Within days of the discovery, astronomers noticed similarities between the orbital path of Ikeya-Zhang and that of other comets observed in 1532 and 1661. Calculations strongly suggest this is the object seen in 1661, which is making its first return visit to the inner solar system in 341 years. No other comet with such a long period has been witnessed on successive orbits around the Sun. (Halley's Comet, by comparison, comes our way every 76 years or so.)

The object's dual name recognizes the two comet hunters who first found it (using their backyard telescopes) on February 1st: Kaoru Ikeya of Shizuoka prefecture, Japan, and Daqing Zhang in Henan province, China. Zhang described the comet as a small, 8.5-magnitude glow 3 arcminutes across in his 20-cm (8-inch) reflector.

If the name "Ikeya" rings a bell, it should. Between 1963 and 1967, Kaoru Ikeya discovered or codiscovered five comets. One of them, Comet Ikeya-Seki, was the famous naked-eye Sungrazer of 1965. But little had been heard from Ikeya (at least outside Japan) until he made his sixth comet discovery on February 1st. "He is the phoenix!" says astrophotographer Shigemi Numazawa of Niigata, who adds that Ikeya, now age 58, manages the Ikeya Optical Lab, a supplier of telescope mirrors to Japan's discriminating observers.