Comet PanSTARRS (C/2014 Q1) has been skirting the northern horizon since mid-June. Now it's ready to dip Down Under, where it may be visible with the naked eye in evening twilight.

I feel a bit sheepish touting this comet's horn for northern hemisphere skywatchers because it presents a great challenge for the brief time it may still be visible. But it's bright! Having just passed perihelion on July 6th, the comet's current magnitude is 4. We'd all spring into action if Comet PanSTARRS were well up at sundown. Unfortunately, it grazes the treetops and quickly vanishes below the horizon.

For stargazers at latitude 40°–45° north, the comet never climbs higher than 1° to 3° above the northwestern horizon an hour after sunset and sets soon after. That's what I call cutting it close! Farther north it rises a titch higher, but the crazy-long twilights at higher latitudes will likely negate any altitude advantage. If you can find a sky that's haze-free down to the western horizon, you still have the remainder of this week to attempt C/2014 Q1.

Observers Down Under fair much better. Viewed from mid-southern latitudes, Comet PanSTARRS quickly climbs into the western winter sky, trekking from Cancer into Leo while passing Venus and Jupiter. By July 15th, it will stand some 7° high near the end of evening twilight and likely be visible with the naked eye from dark skies.

Discovered in August 2014 by the Panoramic Survey Telescope & Rapid Response System (Pan-STARRS) survey atop Haleakala on Maui, expectations ran high that C/2014 Q1 might swell to magnitude 3 with a long, bright tail during July and early August around the time of perihelion. Brightness-wise, that wasn't far off the mark, but it's unclear just how long a tail we might see. The coming weeks will tell.

On July 18th, watch for the thin crescent Moon and comet to pair up some 2° apart. According to Seiichi Yoshida, who maintains the excellent Weekly Information About Bright Comets site, C/2014 Q1 could do magnitude 5.5 or a bit better on that date. Together they should make a wonderful sight in binoculars and a pretty composition for the camera. The comet comes closest to Earth a day later at 109.7 million miles (176.6 million km).

A handful of dedicated comet watchers spied Comet PanSTARRS as it transitioned from the southern sky to the northern in mid-June low in morning twilight. Alan Hale (co-discoverer of Comet Hale-Bopp) caught it on June 14th at 8th magnitude with a strongly-condensed coma.

Once this visitor moves on, it'll be slim pickings for bright comets for northern observers until Comet Catalina (C/2013 US10) leaps into the morning sky in mid-November. In the meantime, we can stock up on hand warmers and winter clothing. 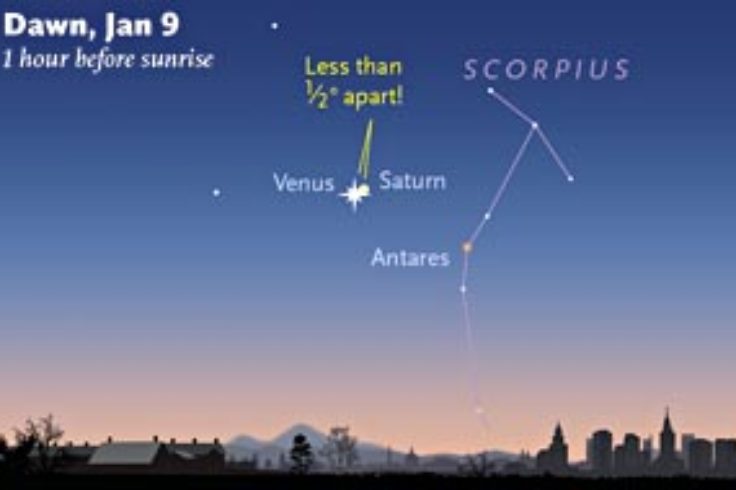